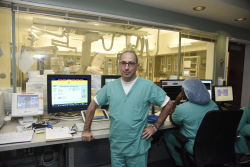 the first site in the world to test a new drug designed to prevent excessive bleeding that can occur from taking ticagrelor, a popular blood-thinning medication sold under the brand name Brilinta.

People who are at risk for heart complications and require stents often take blood thinners to reduce the likelihood of experiencing stent clotting, a heart attack or stroke. However, bleeding is a major side effect of the medication. In addition, patients treated with stents frequently require different types of surgery, which also increases the risk of bleeding.

“An issue for many years has been how to optimally manage these patients who may have a bleeding complication as a result of being on Brilinta or who may need to undergo surgery, which further increases the bleeding risk,” said Dominick Angiolillo, M.D., Ph.D., a professor of medicine and director of cardiovascular research at the University of Florida College of Medicine – Jacksonville, who is facilitating the clinical trial. “We’re exploring how well bentracimab, a recently developed reversal drug, can address this significant unmet need.”

Bentracimab works by reversing Brilinta’s blood-thinning effects on platelets, thus reducing bleeding complications. The drug is administered only for the particular medical procedure and patients are able to resume their blood-thinner regimen shortly afterward.

Angiolillo serves on the steering committee for the company PhaseBio, which manufactures bentracimab. He also helped design the clinical trial. UF Health Jacksonville is the first site in the world to be activated for the trial and the first to enroll a patient.

The initial patient underwent a procedure to widen the esophagus. Two more participating patients at UF Health Jacksonville underwent bypass heart surgery. Before these three patients, the drug had only been tested in healthy volunteers. There have since been two additional UF Health patients to enroll in the trial.

“With these patients, we’ve monitored the way the blood is sticking together,” Angiolillo said. “We test their platelets to observe how well the drug is working.”

Francesco Franchi, M.D., an assistant professor of medicine who specializes in cardiovascular disease at the University of Florida College of Medicine – Jacksonville, is serving as the trial’s principal investigator at UF Health Jacksonville. He said organizing each procedure requires a multidisciplinary effort, including surgery and nursing staff, as well as providers from pharmacy, neurology and the emergency room.

In addition to a collaborative environment, Franchi noted other key attributes that help make UF Health Jacksonville an ideal place to conduct the bentracimab trials.

“We have a dedicated thrombosis research lab that has national and international recognition,” he said. “Plus, we’re a tertiary care center with the infrastructure needed to carry out this study, including 24/7 activation.”

Several other sites in the United States and Canada have since been activated, with locations in Europe soon coming onboard.

Angiolillo meets monthly with the bentracimab steering committee and participating investigators to receive updates and share findings. Their goal is to enroll 200 patients worldwide.

The drug has been granted breakthrough therapy designation by the U.S. Food and Drug Administration. That means because of the need, it’s on a highly regulated fast track that combines a few of the conventional research phases and eliminates a “control” group during the trials.

Angiolillo said this approach has been used for other agents and has allowed drug-regulating agencies to more rapidly approve therapies so they can be used as part of standards of care.

“For many patients who require urgent surgery but are also on ticagrelor, participating in this study is the only option to move forward and it is also the only option to reverse the effects of ticagrelor for those who are experiencing a life-threatening bleed,” Angiolillo said.

“And looking at it from a hospital’s standpoint,’’ he added, “there are major cost savings by avoiding bleeding-related complications during surgery. In addition, we’re helping provide greater quality care.”