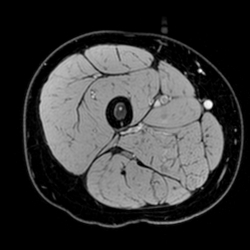 Using innovative methods to measure changes in muscle, a University of Florida team has shown that after treatment with an investigational gene therapy, three young boys with Duchenne muscular dystrophy had considerably lower fat infiltration in their muscles than boys receiving standard treatment.

Duchenne is a severe form of muscular dystrophy that affects about 1 in 3,500 males born each year in the United States. It causes muscles to progressively weaken and lose the ability to regenerate after an injury, eventually replacing muscle tissue with fat and collagen. Many children with Duchenne muscular dystrophy may require a wheelchair by adolescence, and heart and respiratory systems are affected as the disease advances.

“Seeing the boys’ muscle fat fractions stay so low over the study period is really exciting,” said the study’s lead author Rebecca Willcocks, Ph.D., a research assistant professor in the department of physical therapy in the UF College of Public Health and Health Professions.

The findings were published this month in JAMA Network Open.

Duchenne muscular dystrophy is caused by a mutation in the gene for dystrophin, a protein essential for muscle growth and health. The therapy under study, known as rAAVrh74.MHCK7.micro-dystrophin, delivers a form of the dystrophin gene directly to the muscles. In study findings from a clinical trial led by researchers at The Ohio State University and Nationwide Children’s Hospital in Columbus, Ohio that were published last year in JAMA Neurology, four boys with Duchenne who received the treatment showed improvement in function over one year, as demonstrated by improved scores on the North Star Ambulatory Assessment, a rating scale used to measure functional motor abilities in ambulant children with Duchenne.

The UF study of three boys between the ages of 4 and 7 who received the gene therapy compared them with age-matched boys with Duchenne receiving standard treatment and provides more information on how the therapy affected their muscles.

UF researchers, led by Krista Vandenborne, Ph.D., a distinguished professor and chair of the department of physical therapy in the UF College of Public Health and Health Professions and senior author of the new study, have pioneered the use of MRI biomarkers to capture highly accurate and noninvasive measures of muscle changes in children with Duchenne. Using these MRI biomarkers, the UF team can provide rapid feedback on the effects of new Duchenne therapies in clinical trials while generating an objective measure of muscle quality.

“The original clinical trial results showed that these boys improved functionally, but because the boys are so young, it’s hard to tell how much of the motor function gains are due to the gene therapy treatment and how much are due to normal growth and maturation,” Willcocks said. “The MRI biomarker measurements aren’t affected by growth and maturation.”

A long-term study of the natural progression of Duchenne muscular dystrophy led by the UF team also offered important information for understanding the effects of the new dystrophin gene therapy, Willcocks said.

“The gene therapy study was an open-label trial, so there is no placebo group,” she said. “A natural history comparison, while not as robust as a comparison with placebo, is really helpful in evaluating the data. The natural history data acquired in many boys with Duchenne over the last 10 years in the ImagingDMD study, directed by Dr. Vandenborne, were critical to our evaluation.”

Because of the small number of participants enrolled in the gene therapy study, more research is needed, the UF team says, but the results so far are encouraging.

“This study represents a very important and exciting step forward in therapeutic development, providing both supportive evidence for the efficacy of gene therapy in Duchenne muscular dystrophy and demonstrating the value of MR biomarkers in evaluating new therapeutic approaches in muscular dystrophies,” Vandenborne said.

Jill Pease is the public relations director for the UF College of Public Health and Health Professions. She is responsible for developing public relations and communications strategies to promote the... END_OF_DOCUMENT_TOKEN_TO_BE_REPLACED