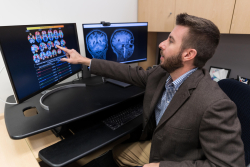 New research published today shows that a form of artificial intelligence combined with MRI scans of the brain has the potential to predict whether people with a specific type of early memory loss will go on to develop Alzheimer’s disease or other form of dementia.

University of Florida researchers studied 55 participants who had been diagnosed with amnestic mild cognitive impairment, a condition in which a person has more memory problems than expected for their age. The findings were published in the journal Frontiers in Aging Neuroscience.

Of the participants, 14 developed dementia and 41 remained stable over a study period that averaged about 15 months.

“A unique aspect of this study is that we were able to identify the exact areas of the brain that differentiated the two groups. This is crucial for predicting which participants are more likely to develop dementia and is also important for our future research efforts,” said Joseph Gullett, Ph.D., a research assistant professor in the department of clinical and health psychology in UF’s College of Public Health and Health Professions who led the study.

People with amnestic mild cognitive impairment typically experience a change in their ability to remember important information, such as appointments or recent events. The proportion who go on to develop dementia ranges from 17.7% to 40.4%, according to the paper.

“What’s really exciting is the idea that we can use this information to say, ‘OK, you’re at a stage where you’re at high risk to develop dementia or Alzheimer’s disease.’ This can tell us that we need to work full force to apply any number of clinical approaches to attempt to ameliorate these effects, slow this progression,” said Adam Woods, Ph.D., associate director of UF’s Center for Cognitive Aging and Memory and a study co-author.

The study was a collaborative effort with the 1Florida Alzheimer’s Disease Research Center, a UF-led consortium of five research institutions in the state, and participants were evaluated at the University of Miami. The algorithm incorporated two MRIs for each participant — one reflecting brain structures and the other a measurement of brain activity detected by subtle changes in blood flow.

“A key value of this artificial intelligence-empowered prediction tool is to fully recognize the individual variability in preventing dementia,” said Ruogu Fang, Ph.D., an assistant professor of biomedical engineering at the UF College of Engineering and a study co-author. “We hope that this study will pave the way for more personalized intervention strategies by helping researchers determine which patients to treat first, when to treat them, which clinical approach to use and how to apply the intervention at an early stage.”

Next steps in this line of research include expanding the number of participants, monitoring them over a longer time frame, and tracking changes in a protein called beta-amyloid that builds up in the brain and is a hallmark of Alzheimer’s disease, Gullett said.

Identifying people who have amnestic mild cognitive impairment and are at high risk of developing dementia could also help them gain access to noninvasive intervention studies aimed at treating the disease in a personalized way, Gullett added.

Other research team members include senior author Ron Cohen, Ph.D., co-director of UF’s Center for Cognitive Aging and Memory, and Alejandro Albizu, a doctoral student in neuroscience at the UF College of Medicine.