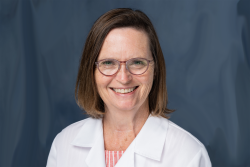 University of Florida psychiatrist Carol Mathews, M.D., an internationally known clinician and translational researcher in the areas of obsessive-compulsive disorder, tic disorders and anxiety disorders, has been named chair of the UF College of Medicine’s department of psychiatry.

Mathews, who has served as interim chair of the department since September 2021, succeeds Regina Bussing, M.D., who stepped down after seven years as chair to focus on clinical care, mentoring and research.

Among her current roles, Mathews serves as the Brooke Professor of Psychiatry, founding director of UF’s Center for OCD, Anxiety and Related Disorders, co-director of the UF Tourette Center of Excellence and founding and interim director of UF Health’s Center for Autism and Neurodevelopment, which opened in 2020. She has also served as the department’s vice chair for strategic development.

Mathews takes the reins at a time of significant growth in the department’s clinical, teaching and research missions and said she is eager to build upon the momentum started by Bussing.

“Dr. Bussing set the stage for a solid, robust psychiatry department and cultivated a culture of wellness, not only within the department of psychiatry but within the College of Medicine,” Mathews said. “My goal going forward is for our department to serve as a national leader in clinical care and scientific discovery and to stand out as a model for education.”

Mathews’ experience made her the ideal candidate to succeed Bussing after a national search, said Colleen Koch, M.D., M.S., M.B.A., dean of the UF College of Medicine.

“After seven years of exemplary leadership by Dr. Bussing, the department of psychiatry has a strong foundation,” Koch said. “Dr. Mathews has served exceptionally as interim chair, and I am excited for her to build upon that success to advance excellence in psychiatric medicine.”

A native of Albuquerque, New Mexico, Mathews graduated from Cornell University with a bachelor’s in biology and completed her medical degree at the Johns Hopkins School of Medicine. She went on to complete an internship and psychiatry residency at the University of California, San Francisco, or UCSF, and research fellowships in biological psychiatry and clinical research methods.

Prior to her arrival at UF, Mathews served as a clinician and research scientist at the University of California, San Diego, and UCSF for 15 years. In 2015, she was recruited to UF under the state’s “preeminence initiative,” which provided funding under 2013 legislation to elevate the national stature of Florida’s public universities.

Mathews’ research and clinical interests focus on identifying the causes and neural underpinnings of OCD and anxiety spectrum disorders, which also include hoarding disorder, tic disorders and disorders including trichotillomania (hair pulling) and excoriation (skin picking). Currently, she is studying the causes and pathophysiology of Tourette syndrome and obsessive-compulsive spectrum disorders, using genetics, neuropsychological approaches, neuroimaging and electrophysiological methods such as EEG to better understand how people with these disorders process information.

Mathews serves as medical director for UF Health’s Fear Facers Camp, a first-of-its-kind summer camp she founded in 2017 for children with OCD or other anxiety disorders. The day camp, which draws children ages 7 to 15 to Gainesville from across the country and has been featured in The New York Times and The Daily podcast, blends one-to-one therapy with exposure and response prevention activities such as touching or being doused with slime or sitting in darkness.

In 2020, Mathews published the first clinical guide to treating hoarding disorder, “Recognizing and Treating Hoarding Disorder: How Much Is Too Much?”, and wrote an article for The Conversation about what effect the COVID-19 pandemic had on hoarding.

In addition, Mathews is principal investigator for four National Institutes of Health studies aimed at understanding the genetics of Tourette syndrome, causes of hoarding and whether kava is an effective treatment for anxiety.

In 2019, Mathews was awarded the College of Medicine exemplary teacher award.

Outside of work, Mathews enjoys spending time with her husband and two children, hiking, and volunteering for Family Promise, a nonprofit that helps families who are experiencing homelessness.

Michelle Koidin Jaffee is the Science Writer for the McKnight Brain Institute of the University of Florida. In more than 20 years as a journalist, she worked as a reporter... END_OF_DOCUMENT_TOKEN_TO_BE_REPLACED