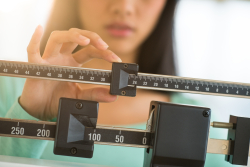 Socioeconomically disadvantaged people fare better at losing weight when they are given modest financial incentives, a new study by a University of Florida Health researcher and his colleagues has found.

Compared with a group that was only given weight-loss resources such as diet plans, those who also could earn money with certain behaviors or goals lost substantially more weight, the researchers concluded. The findings were published Dec. 5 in JAMA Internal Medicine.

The idea was to design an intervention that helps people lose weight, get healthier and become a bit better off financially, said Joseph A. Ladapo, M.D., a professor in the UF College of Medicine’s division of general internal medicine.

The researchers assigned the 668 study participants in New York City and Los Angeles to one of three groups. A “goal-directed” group was given financial incentives tied to evidence-based weight-loss behaviors. “Outcome-based” participants had financial incentives linked to the percentage of weight they lost. Those two groups, along with a third “resources only” group, were given a one-year membership to WW (formerly known as Weight Watchers) along with health education, monthly check-in visits and weight-management tools, including a scale, food journal and physical activity monitor. Each of the groups had approximately 220 members with body mass indexes in the overweight or obese range and median household incomes of about $34,000.

After six months, weight loss among the two groups with financial incentives was considerably greater than those without monetary enticement. The percentage of participants who lost at least 5% of their baseline weight using only weight-management resources was 22.1%. Among those with financial incentives, 39% of the goal-directed group and 49.1% of the outcome-based group hit that weight-loss target.

Incentives for the goal-directed group were based on their participation in certain weight-loss activities such as WW meetings, physical activity goals and weigh-ins. The outcome-based participants were assessed solely on their weight-loss accomplishments. The study’s maximum payout was $750, although the typical goal-directed and outcome-based participant received $440 and $304, respectively.

The study was designed to determine which weight-loss approach — focusing on healthier lifestyle habits or purely on a weight-loss goal — was more effective, Ladapo said.

“For the outcome-based group, it was really just about the weight-loss results and not really the strategy they used,” he said.

After 12 months, the percentage of people in the two incentivized groups who lost at least 5% of their original weight was more closely aligned, at approximately 41% each, the researchers found. While the weight-loss results were similar, Ladapo said he sees more value in a goal-directed approach that emphasizes better lifestyle habits rather than merely striving for a weight-loss number.

“It’s still probably wiser to focus on goal-directed weight loss because people participated in healthier behaviors and there is value in that,” Ladapo said.

He said he was particularly pleased that the monetary incentives motivated people in the goal-directed group to attend WW meetings.

“It was refreshing. It was great to see it have such a positive effect and people being engaged,” he said.

While the study succeeded in helping lower-income people lose weight, Ladapo said the monetary incentives didn’t have as much effect on their financial well-being as he hoped. The researchers are unclear as to why the financial impact wasn’t greater, although Ladapo said one possible explanation is that the study was done in two cities where the cost of living is high.

“It is possible that participants living in low-income neighborhoods may require considerably larger incentives to relieve financial distress,” the researchers wrote.

Next, the research team is considering modifying the study’s design to extend the financial incentives over time — perhaps at lower rates — to see how that affects weight-loss outcomes, Ladapo said.

In addition to Ladapo, 15 researchers from New York University, the Albert Einstein College of Medicine, Cornell University, Bellevue Hospital Center in New York City, New York Harbor Veterans Health Affairs and the University of California, Los Angeles contributed to the research. Some of Ladapo’s research work was conducted while he was a faculty member at UCLA.

Overall, Ladapo said the findings show the potential power financial incentives can have in shaping health metrics among certain groups.

“We helped low-income people with obesity lose weight while earning financial incentives. We showed that’s an effective strategy,” he said. “And it’s hard to lose weight, so just the fact we were able to help people do that is a public health win.”

Doug Bennett joined the UF Health staff in January 2015 as a science writer and editor. His topic areas include anatomy; biochemistry and molecular biology; molecular genetics and microbiology; pathology,... END_OF_DOCUMENT_TOKEN_TO_BE_REPLACED