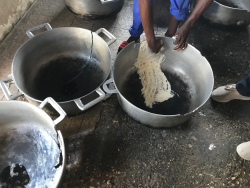 Men in Haitian prisons are consuming fewer than 500 calories a day and are at risk for developing scurvy and beriberi because of nutritional deficiencies, according to a University of Florida College of Public Health and Health Professions study published in Frontiers in Medicine.

The finding that Haitian prisoners are subsisting on starvation-level diets comes against a backdrop of extreme crisis in the country that is fueled by political instability, gang violence, major food, water and fuel shortages, and a new cholera outbreak. The United Nations reported in October that nearly 5 million Haitians are experiencing acute hunger.

“Unfortunately, millions of Haitians are facing a food shortage,” said Arch Mainous III, Ph.D., a professor of health services research, management and policy in the UF College of Public Health and Health Professions and the study’s lead author. “Prisoners are a vulnerable population and their well-being, unfortunately, is not prioritized in a time of societal chaos.”

The UF-led study began in 2021 as an intervention to improve nutrition for men incarcerated at the National Penitentiary in Port-au-Prince and a prison in Mirebalais. The researchers, including local partners from Health Through Walls and the Université d’État d’Haïti, measured calories consumed, body composition and nutrition of more than 1,000 prisoners.

At this baseline assessment, prisoners were consuming an average of 571 calories a day, far below the 2,000-3,000 calories a day recommended by the U.S. Department of Agriculture for adult males. Two-thirds were at risk for developing scurvy because of a vitamin C deficiency and more than 90% were at risk for beriberi, a disease caused by insufficient vitamin B1. Both diseases can be life-threatening.

For the intervention, researchers worked with prison administrators and cooks to gain an understanding of the foods being served and limitations with regard to cost, ingredient availability and lack of freezer storage. The team recommended dietary changes that took these challenges into account while also making substitutions that improved nutrition, such as using brown rice in rice and bean dishes, rather than white rice. The researchers also provided cooks with education on foods that would address the prisoners’ calorie and nutritional deficits. 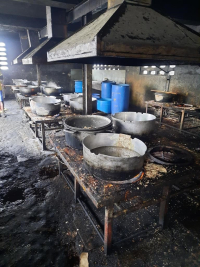 But by the time the study concluded in mid-2022, the situation in Haiti had become even worse. Prison overcrowding­­ and gang violence, among other factors, contributed to greater food scarcity. At follow-up assessment, the researchers found prisoners’ daily intake dropped to an average of 454 calories a day and a larger proportion were at risk for scurvy and beriberi.

“We were surprised and extremely disappointed,” said Mainous, also the vice chair for research at the UF College of Medicine’s department of community health and family medicine. “We started with the assumption that by educating the prison cooks and meeting with the director of the prisons this new knowledge would make a positive difference. We did not understand that as the violence and chaos in the society increased, the ability for prison staff to perform functions like selecting food and even having food for the prisoners would be so negatively affected.”

Until the security situation in Haiti is addressed, it is likely that malnutrition among prisoners and the entire Haitian population will remain a serious problem, Mainous said.

“We learned that it is important to really understand the social context of decision-making and resource allocation in a low-resource setting,” he said. “The prison cooks enthusiastically participated in the education, but in times of chaos it was clear that education was only part of the solution to improve nutrition in the prisons.”

Jill Pease is the public relations director for the UF College of Public Health and Health Professions. She is responsible for developing public relations and communications strategies to promote the... END_OF_DOCUMENT_TOKEN_TO_BE_REPLACED