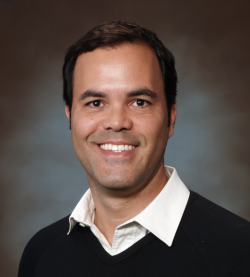 Cells are constantly making new proteins based on instructions from our genes. Ribosomes, the tiny cellular machines that build those proteins, are impressively fast and accurate, but sometimes they hit a glitch.

The process of how cells sense a glitch and begin repairs so the machinery can return to its protein-building job — as well as how cells dispose of the aberrant proteins produced by the glitch — has become clearer due to the work of Scripps Florida professor Claudio Joazeiro, Ph.D., and his collaborators. The findings were published in the journal Nature on March 9.

As cells are building proteins, the process is occasionally halted in error prior to completion. To maintain the integrity of the information encoded on genes, such stops and the incomplete proteins produced are under constant surveillance.

Joazeiro had previously shown that this type of molecular surveillance has existed for billions of years. He had also found that defects in this surveillance cause neurodegeneration in mice and are linked to neuromuscular disease in humans. This finding is important because the causes of cell death in some neurodegenerative diseases aren’t well understood. In the nervous system, cell death leads to the progression of diseases such as Alzheimer’s, ALS and Parkinson’s.

“Gaining fundamental insights into how cells work to sense a malfunction in their protein-building machines may be one of the keys to devising more effective strategies for prevention and treatment of neurodegeneration,” said Joazeiro, a professor of molecular medicine.

During the research, Joazeiro and his colleagues asked some fundamental questions: How do cells sense that the building of a protein has halted and how do they coordinate that sensing with disposal of the unfinished protein? Working with bacterial cells, the team identified a protein known as MutS2, or RqcU, that plays an essential role in the quality control of the cellular protein production process by directly sensing when the ribosome machines prematurely halt their work.

“Because these surveillance processes are so conserved in evolution, we know that the lessons we’re learning from bacteria are also relevant to our understanding of how things happen in more complex eukaryotic cells,” Joazeiro said.

When a ribosome halts during the protein-assembly process, a trailing ribosome can collide with it. Cells have a variety of systems for responding to such “ribosome collisions,” much like the proper, organized response after a large traffic accident. Everyone from paramedics, firefighters, police and tow-truck drivers have a role to play in clearing the road and cleaning up debris. In cells, the ribosome collision sensing and response cycle is responsible for the same return to normalcy. Like the proverbial car crash, restoring order within cells as soon as possible is crucial.

Joazeiro and team found that MutS2 has an analogous molecular function by selectively binding to collided ribosomes and orchestrating some of the required responses. In collaboration with Stefan Pfeffer from Heidelberg University in Germany, they used cryo-electron microscopy to generate a picture of the collision-sensing process. The findings also provide insights into how the incomplete proteins, as well as the mRNA associated with the collided ribosomes, are marked for elimination from the cell.

More broadly, Joazeiro said the results suggest that fully understanding the damage-control responses is important because other scientists’ work suggests ribosome stalling may also be associated with the negative effects of aging.

Next, Joazeiro wants to work on a more detailed understanding of how simple cells “sense” ribosome collisions. That’s helpful for developing hypotheses that can be tested in more complex cells, he said.

The Florida-based branch of Scripps Research is integrating into the research arm of the University of Florida’s academic health center following an agreement reached last year.

The research was supported by the National Institutes of Health (NS102414), the German Research Foundation (SFB1036) and the European Research Council (ERC Advanced Grant 743118).

Doug Bennett joined the UF Health staff in January 2015 as a science writer and editor. His topic areas include anatomy; biochemistry and molecular biology; molecular genetics and microbiology; pathology,... END_OF_DOCUMENT_TOKEN_TO_BE_REPLACED