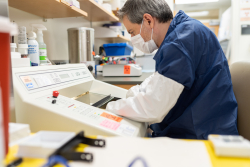 A major step toward transforming the understanding of cardiovascular and kidney disease in the millions of Americans with diabetes occurred Thursday when the National Institutes of Health designated the University of Florida Diabetes Institute the home for a new biobank of human heart and kidney tissue.

A four-year, $10 million NIH grant will allow the institute to establish a first-of-its-kind repository of tissue from human donors that can be used by researchers worldwide to study Type 1 and Type 2 diabetes.

Scientists hope these efforts, which will include harnessing the power of artificial intelligence, will eventually lead to new treatments that better manage or even prevent diabetes and its complications.

“This biobank represents the natural evolution of diabetes research from one having a major focus on studies of diabetes complications using animal models to the direct analysis of human tissue,” said Mark Atkinson, Ph.D., director of the institute.

“We are hoping this allows us to effectively rewrite the textbooks on cardiovascular and renal disease in individuals with diabetes,” he added. “Don’t get me wrong, we’ve learned a great deal from animal models. But moving forward, we believe human tissues are needed to better understand this terrible disease.”

The project will follow the model of the highly successful Network for Pancreatic Organ donors with Diabetes, or nPOD, a UF-based biobank that is the world’s largest open biorepository of pancreatic tissue used in the research of Type 1 diabetes.

Founded by Atkinson in 2007, nPOD has helped overturn long accepted dogma about diabetes and provided deeper insights into the disease than would have been possible using animal models alone. One study tied to nPOD, for example, helped reverse the widespread belief that all beta cells of the pancreas were lost upon or shortly after the onset of Type 1 diabetes.

Atkinson, the American Diabetes Association Eminent Scholar for Diabetes Research at UF’s College of Medicine, said nPOD has enabled more than 300 diabetes studies in 22 countries. To date, UF researchers have received grants of more that $40 million for studies tied to nPOD, and through provisions of tissue globally, supported more than $200 million in additional research worldwide.

This new project will also have a strong artificial intelligence, or AI, component to assist scientists in analyzing the millions of data points expected to be produced. Public data portals are planned to allow scientists easier remote access to information developed by the biobank.

AI takes advantage of the ever-expanding processing powers of the computer to perform complex tasks that might otherwise be impossible, or take too long, if done by the human brain. AI can be programmed to essentially learn and improve its performance and is particularly useful for researchers who need to analyze massive amounts of information, finding patterns that otherwise would be lost in a sea of data.

Artificial intelligence is employed across a wide spectrum of disciplines in research and education at UF, which is the first university in the nation to integrate AI and its applications across its curriculum. The university is also home to HiPerGator, which as one of the world’s fastest supercomputers is instrumental in AI research.

AI scientist and electrical engineer Pinaki Sarder, Ph.D., an associate professor in the UF College of Medicine’s division of nephrology, hypertension and renal transplantation and a member of the UF Intelligent Critical Care Center, has joined Atkinson’s team to help facilitate the use of AI.

Sarder said the biobank is particularly amenable to AI approaches given the large amount of data that will be created as pathology samples are digitized.

“I see AI as having the tremendous potential to bring us somewhere that would not otherwise be possible,” he said. “We can train algorithms to analyze the large data that will be produced by the biobank and to assist scientists in the visualization of that data. I’m really excited to be on board.”

In its first two years, the biobank will collect tissue from 60 organ donors, 20 each from individuals with Type 1 diabetes, Type 2 diabetes and a control group that does not have the disease. Those donor numbers are expected to be expanded in subsequent years. 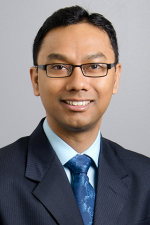 Vasculature and blood samples, in addition to medical histories, also will be collected from individual donors.

The UF Diabetes Institute already has relationships with 57 organ procurement organizations across the nation to assist in the search for donor tissue.

Atkinson said the biobank is just the first step in a journey that will allow UF Health to become a national leader in the study of cardiovascular and kidney disease in diabetes. Once the biobank is established, the NIH is expected to open competition for research grants that make use of the tissue collected from donors.

"I really think we’re going to be the go-to place in the United States in terms of understanding the interplay of the kidney and the heart in diabetes,” Atkinson said. “We’re also at an unparalleled time in history with informatics-based technologies and AI that will really assist us in understanding cellular structure and molecular biology to a degree we haven’t seen before.”

Joining UF in this effort will be investigators at the University of Alabama at Birmingham and Vanderbilt University, who will process heart and kidney tissue, respectively; and the University of Pennsylvania, which will assist in data analysis.

Bill Levesque joined the UF Health staff in May 2017 as a science writer covering the Institute on Aging and research of faculty physicians in the College of Medicine. He... END_OF_DOCUMENT_TOKEN_TO_BE_REPLACED