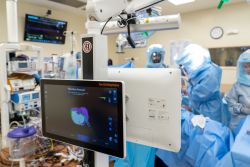 University of Florida Health became one of the first large academic health centers in the Southeast this year to begin using a robot-assisted system in total knee replacement surgeries that eliminates the need for a CT scan while improving precision and patient outcomes.

“This is frontier technology that is really going to advance the specialty in a significant way,” said Chancellor F. Gray, M.D., the William Petty Endowed Professor of Orthopaedic Surgery in the UF College of Medicine’s department of orthopaedic surgery and sports medicine.

“This is a big advantage for us and our patients,” he added. “We have a chance to be really one of the premier centers in the Southeast using this technology. And as a high-volume center, the work we do with CORI and the data we generate will ultimately assist surgeons elsewhere, helping further refine this robotic platform.”

The robotic system allows the surgeon to map out the procedure and best position a knee implant, a patient-specific plan allowing the greatest possible range of motion after surgery. And it minimizes soft tissue damage to allow a more “natural feeling” joint replacement, Gray said.

Remarkably, the system allows physicians to do away with CT scans that have long been a hallmark of such surgeries, reducing patient radiation exposure.

“A CT scan is a high dose of radiation and a big expense,” Gray said.

Instead, an exact 3D rendering is created by surgeons who use a probe to trace the contours of bone after the knee is surgically opened, feeding hundreds of measurements to a computer that creates a virtual model. The rendering takes into account the mechanics of the entire extremity.

CORI also uses an “array” of sensors that, in a knee surgery, are attached to the femur and tibia that work in tandem with cameras to precisely track the knee and leg. The 3D rendering’s accuracy is maintained even as the knee is manipulated during surgery and as the bone is sculpted, or resected. The image is updated every three-hundredths of a second, Gray said.

That image, which can be shifted to see different angles via touchscreen during surgery, provides something of a road map so the surgeon can visualize the bone requiring resection.

He likens the technology to using Google maps to avoid traffic jams.

“You’re trying to predict problems before you would encounter them to have the smoothest and most predictable path to the best possible endpoint,” Parvataneni said. 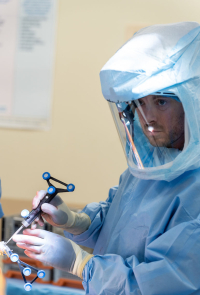 A hand-held device with a high-speed burr at its tip precisely sculpts bone, using a technology called “computerized numerical control,” or CNC, improving accuracy. The surgeon controls the movement of the burr by following a computerized surgical workflow, ensuring no bone beyond what is necessary for an implant is trimmed, among other benefits. The 3D image is color coded so that the surgeon can track what bone still requires resection as they guide the device.

The robotic system might see its biggest impact in lower-volume health centers where the technology reduces surgical variability and, ultimately, reduces the number of failed joint replacements.

“If you’re a newer surgeon or one who does less arthroplasty surgery, the robot helps you be more precise and consistent — reducing outliers,” said surgeon Hari K. Parvataneni, M.D., who holds the Peter Gearen, M.D., Endowed Professorship in Orthopaedics.

At UF Health, orthopaedic surgeons maintain one of the busiest, highest-quality practices in the Southeast. But even here, the robotic platform is still a useful tool, especially when it comes to the placement of implants, Gray and Parvataneni said.

Traditionally, surgeons tried to “feel the motion” of the joint as they operated, Gray said. A surgeon’s experience helped guide their hands as they determined whether connecting ligaments are too tight or loose and require adjustment.

“Now you can implant and balance the soft tissue so precisely that it obviates the need for any sort of guesswork,” Gray said. “You can avoid more soft tissue dissection by planning out your case a bit more carefully at the outset.”

That precision improves outcomes, he said.

UF Health, as a high-volume center, is positioned to help improve the technology by providing data that can be used to refine it.

“Companies like Smith & Nephew have this technology that’s growing quickly,” Parvataneni said. “And they need clinical input, high-level surgeon input to be able to fine-tune this technology to actually add things incrementally, such as predictive analytics. For example, looking at what factors in surgery can predict the lowest chance of problems with the best outcomes at one year. Having this technology at a high-volume teaching program is a key part of its optimization and increased utility.”

Bill Levesque joined the UF Health staff in May 2017 as a science writer covering the Institute on Aging and research of faculty physicians in the College of Medicine. He... END_OF_DOCUMENT_TOKEN_TO_BE_REPLACED