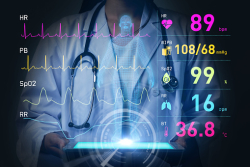 Using data collected from patients’ vital signs, University of Florida researchers have designed an artificial intelligence system that can accelerate and focus doctors’ decision-making during the crucial, early stages of hospitalization.

The algorithm works by taking torrents of data from six vital signs measured within six hours of hospital admission. It then focuses these data into one of four distinct clusters, giving doctors clearer, timelier and more accurate insight into a patient’s prognosis and likely medical outcomes. The findings were published Oct. 13 in the journal PLOS Digital Health.

The approach uses artificial intelligence to analyze patient data faster and more thoroughly than physicians, said Azra Bihorac, M.D., senior associate dean for research affairs at the UF College of Medicine and director of UF’s Intelligent Critical Care Center. Within hours, the system can identify patients who may be at risk of poor outcomes.

“This system has the potential to speed up doctors’ decision-making as well as make it more accurate,” Bihorac said.

The findings are the result of a collaboration among a dozen UF researchers with expertise in surgery, computer science, medicine, anesthesiology and biomedical engineering.

To evaluate the system, the researchers used a deidentified database of adult patients who were admitted to UF Health Shands Hospital between 2014 and 2016. The algorithm was validated and tested using data from nearly 100,000 people across all age groups.

When machine learning, a type of artificial intelligence, was applied to routine, early vital-sign data, the system identified patients with unique disease categories and distinct clinical outcomes. The patients were then grouped into one of four distinct “clusters.” Patients assigned to one of the clusters showed early signs of low blood pressure, increased heart activity and low-grade inflammation. While these conditions can be severe in their early stages, they also have the potential to resolve and result in favorable outcomes. The algorithm grouped other patients into another cluster most likely to have chronic kidney and cardiovascular disease. They were also more likely to die within three years, the researchers found.

The algorithm’s value lies in its ability to collect and quickly analyze multiple patient data points, Bihorac said. For instance, low blood pressure can be an early indicator of various medical troubles ahead. When combined with other patient data and analyzed by an algorithm, doctors have a clearer picture of the patient’s trajectory.

“It’s really like an early warning sign. Within six hours, it can help identify patients who may be at risk of not having a good outcome. It tells us which patients may be at risk of deteriorating and who needs more attention right away,” she said.

Next, Bihorac said she is seeking additional grants that will allow the team to further study the system and eventually test its effectiveness in currently hospitalized patients. Such a system could likely be deployed without significant cost, she said.

“This is such a simple and elegant solution. It takes data that are already being collected and uses it to its full potential to benefit the patient,” Bihorac said.

Colleagues from the UF Intelligent Critical Care Center who made notable contributions to the research include Yuanfang Ren, Ph.D., a computer science expert and assistant scientist in the UF College of Medicine; Tyler J. Loftus, M.D., an assistant professor in the department of surgery; and Gilbert R. Upchurch, M.D., a professor and chair of the department of surgery, Bihorac said.

The research was supported by multiple National Institutes of Health grants, the National Science Foundation and the University of Florida.

Doug Bennett joined the UF Health staff in January 2015 as a science writer and editor. His topic areas include anatomy; biochemistry and molecular biology; molecular genetics and microbiology; pathology,... END_OF_DOCUMENT_TOKEN_TO_BE_REPLACED