When the virus that causes COVID-19 enters the body, it hijacks cellular proteins and suppresses the human inflammatory response, allowing the virus to spread. University of Florida researchers have discovered a novel way in the lab to fight rapidly evolving strains of coronaviruses by breaking that cycle.

The group created a molecular “decoy” that blocks two proteins coronaviruses use to evade a normal immune system response. Blocking these proteins prevents the virus from taking hold within human cells, the researchers found. During early tests, short chains of amino acids, known as peptides, inhibited the replication and release of two coronaviruses including SARS-CoV-2. The findings were published recently in the journal Frontiers in Immunology.

“These peptides have the potential to allow our immune system to fight off the virus more effectively,” Lewin said.

To establish their findings, the researchers focused on two coronaviruses. One is a seasonal virus that causes upper-respiratory infections like the common cold. Researchers at UF and elsewhere already knew that people with antibodies to it were less likely to develop serious COVOD-19 infections. 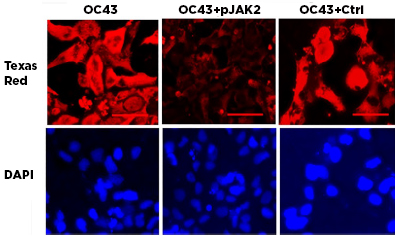 The presence of the pJAK2 peptide (top middle) is shown to block replication of a human coronavirus. The next panel (top right) shows how an inactive control peptide does not affect the spread of the virus.

That potential benefit intrigued Chulbul M. Ahmed, Ph.D., a research assistant professor of molecular genetics and microbiology. Their team developed a peptide known as pJAK2. During testing on human cells, the compound significantly reduced the viruses’ concentrations and ability to replicate. In SARS-CoV2, the peptide reduced the virus’s replication more than tenfold, the researchers found. The cell-penetrating peptides work by acting as a decoy and suppressing two proteins that would otherwise allow invading viruses to thrive.

When the peptide was combined with a second virus-inhibiting protein, viral activity was inhibited even further than with either peptide treatment alone.

A future COVID-19 therapy based on pJAK2 intrigues the researchers for several reasons. It can be synthesized easily and in large quantities at a reasonable cost, Ahmed said. And it has natural origins as a cell-penetrating form of 13 amino acids already found in humans.

“The case to be made here is that we’re not dealing with a foreign substance. It’s something that the human body already produces in some form,” Ahmed said.

The researchers believe pJAK2 would be most useful as an early-stage therapy that fights the SARS-CoV-2 virus by stimulating an immune response. Several antiviral drugs to treat COVID-19 in its early stages are already on the market, including the well-known remdesivir.

“This would be a potentially useful treatment for someone with an early or intermediate-stage infection but certainly not for someone who already has a serious inflammatory response to the virus,” Lewin said.

The discovery may also prove to be a preventive treatment for COVID-19, Ahmed said. Testing on the influenza virus revealed both therapeutic and preventive qualities. Ahmed said it’s reasonable to believe those same characteristics could apply to SARS-CoV-2 and its variants as well as other viruses that lead to herpes, Ebola, the flu and monkeypox.

“For influenza, we have shown that it acts both as a prophylactic as well as a therapeutic compound. So this could potentially be given to uninfected family members and primary contacts of the affected individuals to protect them from getting a more serious form of SARS-CoV-2,” Ahmed said.

Next, the researchers want to fully test their findings in primary human lung cells before moving to experiments in mouse models and eventually human clinical trials.

Doug Bennett joined the UF Health staff in January 2015 as a science writer and editor. His topic areas include anatomy; biochemistry and molecular biology; molecular genetics and microbiology; pathology,... END_OF_DOCUMENT_TOKEN_TO_BE_REPLACED