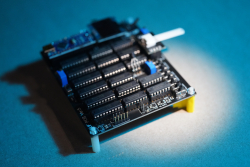 With any highly infectious disease, time can be a killer.

It is crucial to get a test result for a pathogen quickly, lest someone continue in their daily lives infecting others. And delays in testing have undoubtedly exacerbated the COVID-19 pandemic.

Unfortunately, the most accurate COVID-19 test often takes 24 hours or longer to return results from a lab.

Researchers at the University of Florida, however, have helped developed a COVID-19 testing device that can detect coronavirus infection in as little as 30 seconds as sensitively and accurately as a PCR, or polymerase chain reaction test, the gold standard of testing. They are working with scientists at National Yang Ming Chiao Tung University in Taiwan.

The device, researchers said, could transform public health officials’ ability to quickly detect and respond to the coronavirus — or the next pandemic.

UF has entered into a licensing agreement with a New Jersey company, Houndstoothe Analytics, in hopes of ultimately manufacturing and selling the device, not just to medical professionals but also to consumers.

Like PCR tests, the device is 90% accurate, researchers said, with the same sensitivity, according to a recent peer-reviewed study published by the UF group.

“There is nothing available like it,” said Josephine Esquivel-Upshaw, D.M.D., a professor in the UF College of Dentistry’s department of restorative dental sciences and member of the research team that developed the device. “It’s true point of care. It’s access to care. We think it will revolutionize diagnostics.” 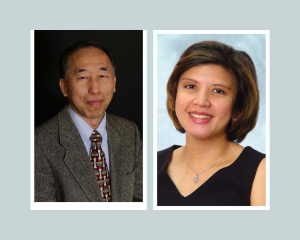 The device is not yet approved by the U.S. Food and Drug Administration. First, researchers said, they have to ensure that test results are not thrown off by cross-contamination with other pathogens that might be found in the mouth and saliva. These include other coronaviruses, staph infections, the flu, pneumonia and 20 others. That work is ongoing.

The hand-held apparatus is powered by a 9-volt battery and uses an inexpensive test strip, similar to those used in blood glucose meters, with coronavirus antibodies attached to a gold-plated film at its tip. The strip is placed on the tongue to collect a tiny saliva sample.

The strip is then inserted into a reader connected to a circuit board with the brains of the device.

The voltage signal is amplified a million times and converted to a numerical value — in a sense, the sample’s electrochemical fingerprint. That value will indicate a positive or negative result, and the lower the value, the higher the viral load. The device’s ability to quantify viral and antibody load makes it especially useful for clinical purposes, researchers said.

The product can be constructed for less than $50, Esquivel-Upshaw said. In contrast, PCR test equipment can cost thousands.

The research team also is studying its ability to detect specific proteins that could be used to diagnose other illnesses, including cancer, a heart attack and immune health.

Fan Ren, Ph.D., a distinguished professor in the Herbert Wertheim College of Engineering’s department of chemical engineering, and his team had been developing semiconductor-based sensor devices long before COVID-19 for nonmedical purposes.

He noted that he is inspired in his work by the recent death of his wife, which was unrelated to COVID-19. He connects his grief to the mourning of the world at large.

“Almost a million people have died of COVID” in the United States, Ren said. “Those are so many tragedies. Old people. Young people. You name it. I said, ‘No, that’s it.’ That is too much.”

He said several institutions have worked on devices using a field effect transistor, or FET, like that found in the COVID-19 testing device his team is developing. But those devices are basically one-offs — a sample is applied directly to the FET, which means the transistor is not reusable and must be discarded.

That makes those devices expensive and impractical for mass testing, Ren said.

Then he hit on the idea of separating transistor from sample, like blood glucose meters that use test strips to collect a drop of blood after a lancet pierces a finger. This innovation, Ren said, makes the UF device unique, affordable and easy to use.

Ren said the device could be used for venues with large crowds, such as concerts, sporting events, classrooms, in addition to medical settings. Researchers say the unit would also provide access to accurate, inexpensive testing in rural areas or in developing nations.

And the personal uses, researchers say, are limitless — parties, baby showers and other small gatherings.

“Yes or no. You’re infected or not infected. You get the answer right away,” said Ren.

Bill Levesque joined the UF Health staff in May 2017 as a science writer covering the Institute on Aging and research of faculty physicians in the College of Medicine. He... END_OF_DOCUMENT_TOKEN_TO_BE_REPLACED