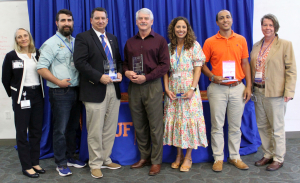 Veterinarians focusing on areas ranging from small animal practice to diagnostic imaging and surgery have received the University of Florida College of Veterinary Medicine’s 2022 Distinguished Awards.

A 1999 graduate of the college and a small animal practitioner, Sutliff worked in emergency medicine immediately following graduation and moved to Jacksonville with his family in 2001. He then purchased a small animal practice, which he owned for 18 years, providing the community with high-quality small animal medical care and client education.

He became active in organized veterinary medicine in his community, serving as president of the Jacksonville Veterinary Medical Society in Duval County and subsequently for two terms on the Florida Veterinary Medical Association’s executive board.

A two-time recipient of the FVMA’s Gold Star Award for outstanding contributions to veterinary medicine in the state, Sutliff served for two terms as FVMA president, in 2016 and again 2021, when he was invited back to the group’s executive board to provide stability and leadership during challenges relating to the pandemic between 2020-2022. He remains passionate about organized veterinary medicine and the college, and served for two years as a member of its admissions committee, providing guidance and insight in the review of potential applicants.

Hostnik, a veterinary radiology specialist, received his D.V.M. from UF in 2012. Following graduation from veterinary school, he completed an internship in small animal surgery and medicine at South Shore Animal Hospital in South Weymouth, Massachusetts. In 2016, he completed a residency in diagnostic imaging, as well as a master’s degree, at The Ohio State University’s College of Veterinary Medicine.

Dan Lewis, D.V.M., a veterinary orthopaedic surgery specialist, received the Distinguished Service Award. Lewis received his veterinary degree from the University of California, Davis in 1983. He completed an internship in small animal medicine and surgery at Louisiana State University in 1984 and a residency in small animal surgery at UF in 1987.

Lewis spent a year as the surgical registrar at Sydney University before returning to Louisiana State University in 1988 as an assistant professor. In 1993, he returned to UF, where he is currently a professor of small animal surgery and holds the Jerry and Lola Collins Eminent Scholar Chair in Veterinary Sports Medicine. Lewis is also a former president of the Veterinary Orthopedic Society. His special interests include trauma and reconstructive surgery with a focus on the use of circular and hybrid external skeletal fixation for fracture management, deformity correction and limb salvage procedures.

Erin Porter, D.V.M., a veterinary radiology specialist, won the Special Service Award. She received her D.V.M. degree from UF in 2007. Following her graduation from veterinary school, she returned to UF for an internship and a subsequent residency in diagnostic imaging. She joined the college’s faculty in 2013 after receiving her board certification from the American College of Veterinary Radiology.

Porter has served as chief of the college’s diagnostic imaging service since 2017, and during that time has provided key leadership in the areas of teaching and clinical care. She has been active at the college level through her service on numerous committees, as well as at the national level with the American College of Veterinary Radiology, and is recognized nationally for her clinical service and scholarship.

Jacob Vencil, D.V.M., received the Outstanding Young Alumni Award. He is a 2013 graduate of the UF College of Veterinary Medicine and a small animal practitioner. Following graduation, he moved to the coast of Northeast Florida, where he worked for three years as a veterinarian at a large 24-hour emergency hospital in Palm Coast, gaining valuable experience working with complicated medical and surgical cases and state-of-the-art equipment.

Subsequently drawn to the community of St. Augustine, Vencil became the owner of Palencia Pet Clinic in 2016. Shortly thereafter, he became the medical director/owner of Shoreline Veterinary Hospital, and in 2021, he opened a third practice in Ponte Vedra Beach. A new 10,000-square-foot facility opened at his Palencia clinic location in the spring of 2022. Dr. Vencil has been a member of the college’s admissions committee since 2022 and is active in his local, state and national veterinary associations.

There was no recipient of the college’s Alumni Achievement award in the M.S./Ph.D. category this year.

The awards were presented June 11 during the college’s inaugural alumni weekend.

Sarah Carey, M.A., A.P.R., is director of communications at the University of Florida College of Veterinary Medicine, a job she has held since 1990. Sarah holds a master’s degree in... END_OF_DOCUMENT_TOKEN_TO_BE_REPLACED