Paroxysmal supraventricular tachycardia (PSVT) is episodes of rapid heart rate that start in a part of the heart above the ventricles. "Paroxysmal" means from time to time.

Video: What makes your heart beat?

Normally, the chambers of the heart (atria and ventricles) contract in a coordinated manner. 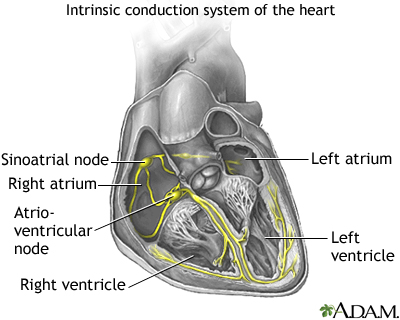 Conduction system of the heart

The rapid heart rate from PSVT may start with events that occur in areas of the heart above the lower chambers (ventricles).

There are a number of specific causes of PSVT. It can develop when doses of the heart medicine, digitalis, are too high. It can also occur with a condition known as Wolff-Parkinson-White syndrome, which is most often seen in young people and infants.

The following increase your risk for PSVT:

Symptoms most often start and stop suddenly. They can last for a few minutes or several hours. Symptoms may include:

Other symptoms that can occur with this condition include:

A physical exam during a PSVT episode will show a rapid heart rate. It may also show forceful pulses in the neck.

The heart rate may be over 100, and even more than 250 beats per minute (bpm). In children, the heart rate tends to be very high. There may be signs of poor blood circulation such as lightheadedness. Between episodes of PSVT, the heart rate is normal (60 to 100 bpm).

An ECG during symptoms shows PSVT. An electrophysiology study (EPS) may be needed for an accurate diagnosis and to find the best treatment.

Because PSVT comes and goes, to diagnose it people may need to wear a 24-hour Holter monitor. For longer periods of time, another tape of the rhythm recording device may be used. 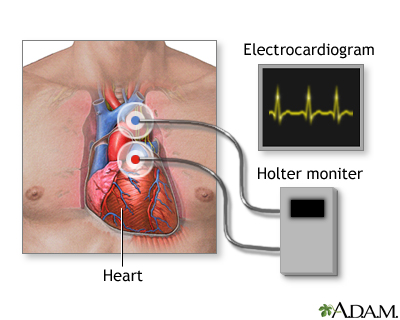 PSVT that occurs only once in a while may not need treatment if you don't have symptoms or other heart problems.

You can try the following techniques to interrupt a fast heartbeat during an episode of PSVT:

You should avoid smoking, caffeine, alcohol, and illicit drugs.

Emergency treatment to slow the heartbeat back to normal may include:

Long-term treatment for people who have repeat episodes of PSVT, or who also have heart disease, may include:

PSVT is generally not life threatening. If other heart disorders are present, it can lead to congestive heart failure or angina.

Call your health care provider if:

It is especially important to contact your provider if you also have other heart problems.