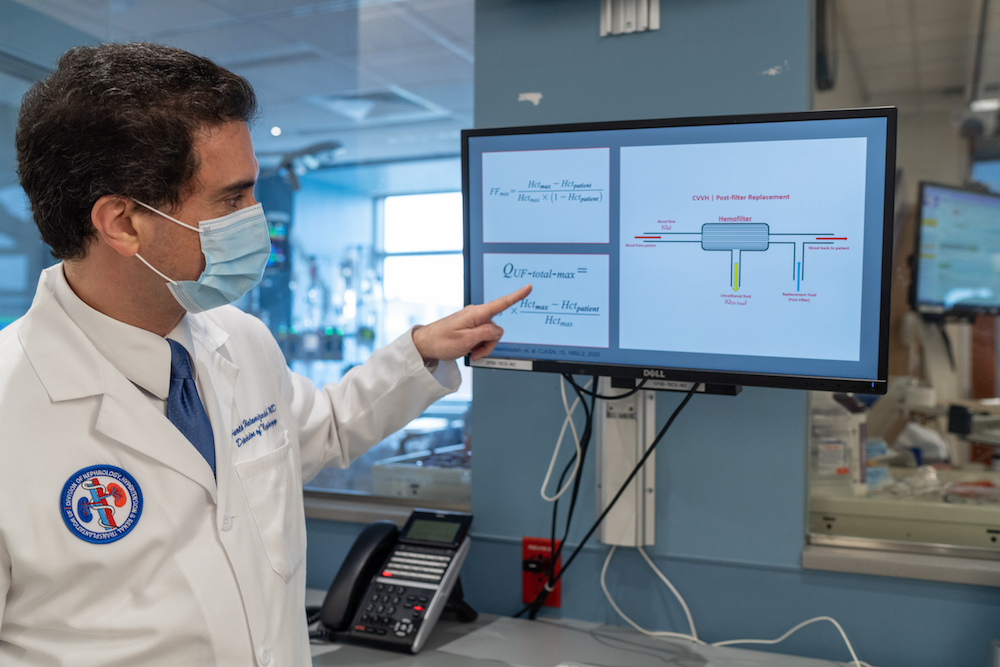 Continuous venovenous hemofiltration, or CVVH, is a short-term treatment used in the ICU for patients with acute or chronic renal failure who cannot tolerate conventional hemodialysis and are unstable. The treatment consists of the patient’s blood flowing out of the dialysis catheter and into the CVVH machine, where it is filtered to remove waste fluid. Fluids and electrolytes are then replaced and the blood is returned to the patient through the catheter.

Fluid replacement can be done in either of two locations, explains Parta Hatamizadeh, MD, an assistant professor in the division of nephrology at the University of Florida College of Medicine. “Replacement fluid can come into the circuit before the hemofilter, so that the blood is diluted before some of its liquid part is removed. Or we can remove some fluid and then replace it with our replacement fluid after the plasma is filtered.” 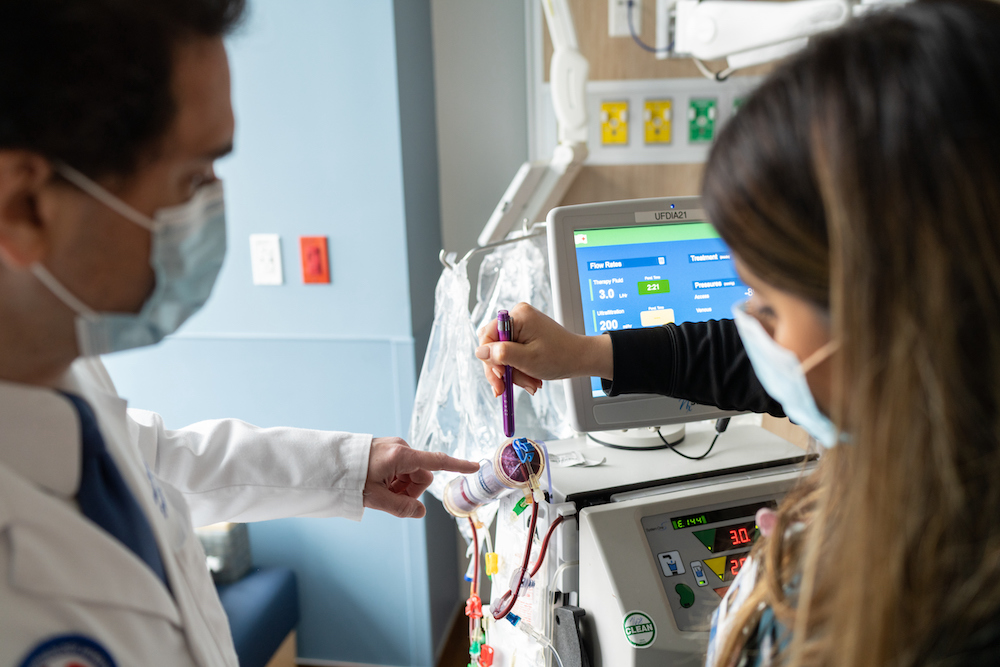 With pre-filtration fluid replacement, the problem is even greater, Hatamizadeh realized. “People think the lower the filtration fraction, the better for circuit patency, but that is not correct. The blood is diluted before it even gets to the hemofilter. It doesn’t matter how much fluid we give, it is not going to change the concentration of the blood after filtration, because the filter removes whatever has been already added to the blood. Therefore, that will not change the risk of clot formation.”

Hatamizadeh searched the medical literature to find support for the current practice. All he found was a decades-long chain of articles that simply cited previous articles, none of them providing evidence, or even a sound rationale, for recommending a filtration fraction of 20%-30%. Finally, he identified the source of that recommendation: One or two papers from the 1980s that refer to continuous arteriovenous, not venovenous, hemofiltration, and not even relevant to the relationship between filtration fraction and hemofilter clotting.

In November, Hatamizadeh and two colleagues published mathematical evidence for an alternative to relying on a single cutoff point of filtration fraction. In the Clinical Journal of the American Society of Nephrology, they show that because hemoconcentration impacts the risk of hemofilter clot formation, calculating the end-of-hemofilter hematocrit is likely to be more useful than a universal threshold for filtration fraction.

The paper has been well-received, Hatamizadeh says. In fact, manufacturers of CVVH machines have already approached him about changing their software.

“We have to look critically at everything we read or hear,” he concludes. “Relying on what he said or she said, or what that book said or that article said, can go wrong without any checks for years. We have to know whether we’re doing something because it’s correct or because of our habits.”