The best way to prevent the spread of COVID-19 is to get vaccinated. You can get a vaccine in many places in your community. Find a walk-up location or schedule an appointment today. END_OF_DOCUMENT_TOKEN_TO_BE_REPLACED

Ventricular tachycardia (VT) is a rapid heartbeat that starts in the lower chambers of the heart (ventricles).

VT is a pulse rate of more than 100 beats per minute, with at least 3 irregular heartbeats in a row.

The condition can develop as an early or late complication of a heart attack. It may also occur in people with:

VT can occur without heart disease.

Scar tissue may form in the muscle of the ventricles days, months, or years after a heart attack. This can lead to ventricular tachycardia.

VT can also be caused by:

"Torsade de pointes" is a specific form of VT. It is often due to congenital heart disease or the use of certain medicines.

You may have symptoms if the heart rate during a VT episode is very fast or lasts longer than a few seconds. Symptoms may include:

Symptoms may start and stop suddenly. In some cases, there are no symptoms.

The health care provider will look for:

Tests that may be used to detect ventricular tachycardia include:

You may also have blood chemistries and other tests.

Treatment depends on the symptoms, and the type of heart disorder.

If someone with VT is in distress, they may require:

After an episode of VT, steps are taken to further episodes. 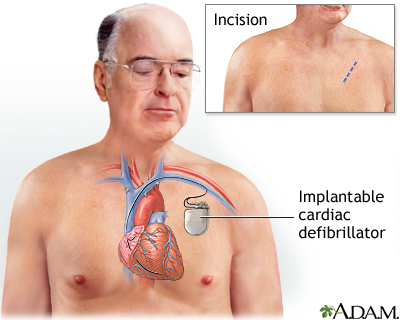 The outcome depends on the heart condition and symptoms.

Ventricular tachycardia may not cause symptoms in some people. However, it can be deadly. It is a major cause of sudden cardiac death.

Go to the emergency room or call the local emergency number (such as 911) if you have a rapid, irregular pulse, faint, or have chest pain. All of these may be signs of ventricular tachycardia.

In some cases, the disorder cannot be prevented. In other cases, it can be prevented by treating heart problems and avoiding certain medicines.