For more information on our ongoing response to COVID-19 in Gainesville, Jacksonville and Central Florida, visit our coronavirus website. END_OF_DOCUMENT_TOKEN_TO_BE_REPLACED

Fewer teens are having babies, a long-term trend that has accelerated in recent years. Since 1991, federal numbers show, the teen birth rate is down 67 percent.

But some U.S. counties continue to buck that trend.

A team that includes University of Florida Health researchers has identified clusters of teen births across the nation in a study providing “a literal road map” for local and state officials to target resources and interventions to help reverse this pattern.

“The big take-home is just showing that, despite the trend throughout the United States of decreasing teenage birth rates, we have these areas we’ve identified through this mapping that aren’t falling,” said study co-author Kay Roussos-Ross, M.D., an assistant professor in the department of obstetrics and gynecology in the UF College of Medicine. One of the most striking findings, the researchers noted, was the high incidence of teen births on Native American reservations. Reservations held eight of the top 10 clusters in population areas with fewer than 100,000 people, according to the study, published recently in the journal Obstetrics & Gynecology.

Those areas under 100,000 people with the highest teen birth rates, from high to low, are:

“One of the big things we tried to show here was, if we have limited funds available in the United States, should we be targeting those funds in specific areas,” said Julie Zemaitis Decesare, M.D., an associate professor and the UF College of Medicine’s obstetrics and gynecology residency program director at Sacred Heart Health System in Pensacola. “One example is that this may show that maybe we should focus on reservations to see if we can further make an impact.”

The study’s lead author is Raid Amin, Ph.D., professor of mathematics and statistics at the University of West Florida in Pensacola. Co-authoring is Jennifer Hans, M.S., a student at UWF whose idea led to the study.

Researchers wanted to learn whether certain areas of the contiguous United States could be identified as teen birth “hot spots” despite the decline in pregnancy rate in this group. They decided to look at all live births to women 15 to 19 years old from 2006 to 2012, drawing data from the National Center for Health Statistics. 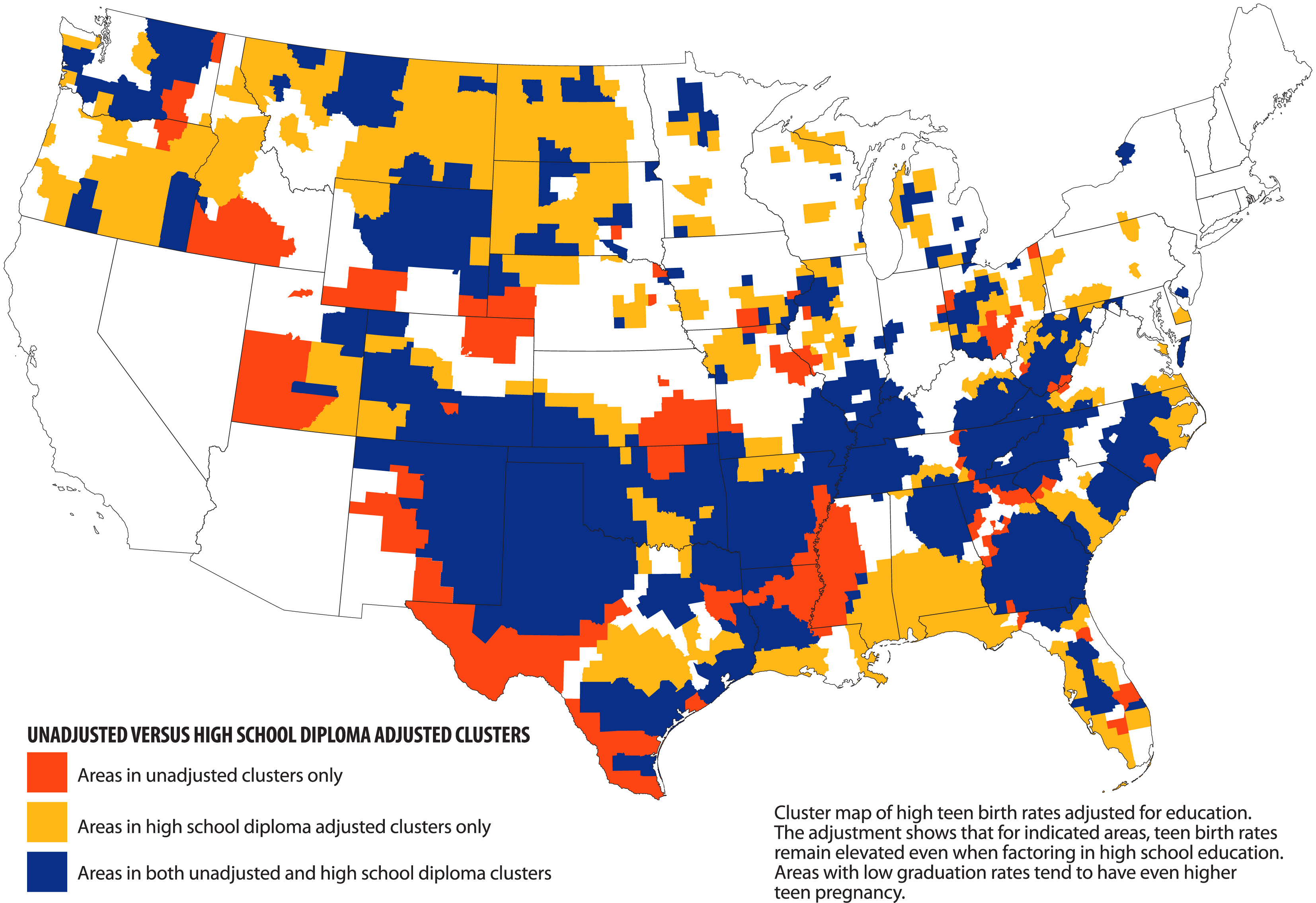 Researchers hypothesized that hot spots would remain even after adjusting the data for poverty and educational level, which are known predictors of high teen birth rates. The researchers also tabulated unadjusted rates. By taking poverty and educational attainment out of the mix, the study said, “This indicates that there are other factors contributing to the high teenage birth rates in these clusters.”

And those factors can be targeted once they are identified, researchers said.

In fact, hot spots did remain.

The cities greater than 100,000 population rated with the highest teen birth rates, adjusted for education level, from high to low, are:

The cities greater than 100,000 population rated with the highest teen birth rates, adjusted for poverty, from high to low, are:

Bill Levesque joined the UF Health staff in May 2017 as a science writer covering the Institute on Aging and research of faculty physicians in the College of Medicine. He... END_OF_DOCUMENT_TOKEN_TO_BE_REPLACED