A pacemaker is a small, battery-operated device. This device senses when your heart is beating irregularly or too slowly. It sends a signal to your heart that makes your heart beat at the correct pace. 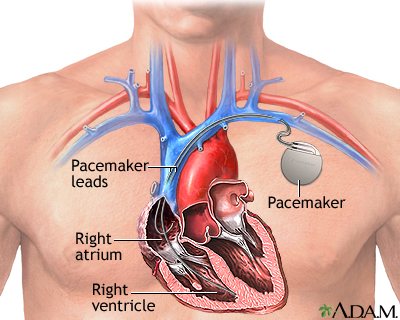 Newer pacemakers weigh as little as 1 ounce (28 grams). Most pacemakers have 2 parts:

A pacemaker is implanted under the skin. This procedure takes about 1 hour in most cases. You will be given a sedative to help you relax. You will be awake during the procedure.

A small incision (cut) is made. Most often, the cut is on the left side (if you are right handed) of the chest below your collarbone. The pacemaker generator is then placed under the skin at this location. The generator may also be placed in the abdomen, but this is less common. A new "leadless" pacemaker is a self-contained unit that is implanted in the right ventricle of the heart.

Using live x-rays to see the area, the doctor puts the leads through the cut, into a vein, and then into the heart. The leads are connected to the generator. The skin is closed with stitches. Most people go home within 1 day of the procedure.

There are 2 kinds of pacemakers used only in medical emergencies. They are:

They are not permanent pacemakers.

When your heart beats too slowly, your body and brain may not get enough oxygen. Symptoms may be

Some pacemakers can be used to stop a heart rate that is too fast (tachycardia) or that is irregular.

Other types of pacemakers can be used in severe heart failure. These are called biventricular pacemakers. They help coordinate the beating of the heart chambers.

Possible complications of pacemaker surgery are:

Always tell your health care provider about all the drugs you are taking, even drugs or herbs you bought without a prescription.

The day before your surgery:

On the day of the surgery:

Your provider will tell you when to arrive at the hospital.

You will probably be able to go home after 1 day or even the same day in some cases. You should be able to return to your normal activity level quickly.

Ask your provider how much you can use the arm on the side of your body where the pacemaker was placed. You may be advised not to:

When you leave the hospital, you will be given a card to keep in your wallet. This card lists the details of your pacemaker and has contact information for emergencies. You should always carry this wallet card with you. You should try to remember the name of the pacemaker manufacturer if you can in case you lose your card.

Pacemakers can help keep your heart rhythm and heart rate at a safe level for you. The pacemaker battery lasts about 6 to 15 years. Your provider will check the battery regularly and replace it when necessary.