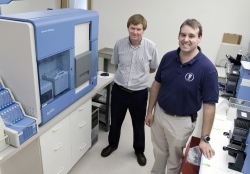 Researchers at the University of Florida College of Veterinary Medicine say proteins common to multiple strains of Anaplasma marginale, a tick-borne pathogen that costs the U.S. cattle industry millions of dollars annually and is even more devastating in developing countries, could hold the key to developing an effective vaccine against the disease.

In the July issue of Vaccine, UF veterinary scientists report sequencing the genes of multiple strains of the bacteria from across North America to identify common substances that could be candidates for vaccine development.

Anaplasma bacteria infect red blood cells and are estimated to cost the cattle industry $300 million a year, according to industry estimates. Sick animals may develop a fever, have difficulty breathing and may be anemic. Thirty percent of the animals that contract bovine anaplasmosis die.

“At the DNA level, we examined genes to determine how similar they are among various strains of the disease,” said Michael J. Dark, D.V.M., Ph.D., an assistant professor in the college’s department of infectious diseases and pathology. “If they show similarity, they are probably better vaccine candidates because they would presumably offer cross-protection against multiple strains.”

Although many attempts have been made since the early 1900s to develop a vaccine against Anaplasma marginale, none have provided complete protection against infection with different strains of the bacteria, Dark said. Some previous studies have focused on two particular proteins, MSP2 and MSP3, which are known to protect against certain strains, but which have not yielded universal protection.

The research team, including scientist Basima Al-Khedery, Ph.D., and Anthony F. Barbet, Ph.D., a professor of molecular biology, used a technique known as pyrosequencing to compare multiple strains of Anaplasma marginale and determine which showed fewer DNA changes from strain to strain.

“No vaccine has been proven 100 percent effective against all strains, which is necessary for an effective vaccine,” Dark said. “Ideally, the perfect vaccine would also have other characteristics, such as not needing to be refrigerated; otherwise in places like Africa, you’d never be able to use it. You’d also want a vaccine to be effective quickly and long-lasting, hopefully for the life of the animal, or at least so that it wouldn’t need booster shots every year.”

But the disease is difficult to defend against, for several reasons.

“We already have vaccines for diseases that are relatively easy to produce vaccines for, such as smallpox in people,” Dark said. “The biology of Anaplasma marginale is more difficult to protect against, because the organism has evolved in order to infect cattle for life. Because of its ability to adapt and evade the immune system, this disease has made our lives that much more difficult in terms of trying to find a vaccine that is effective.”

Dark and Barbet are also members of UF’s Emerging Pathogens Institute, a multidisciplinary research endeavor to prevent or contain new or re-emerging diseases.

Jim Handley, executive vice president of the Florida Cattlemen’s Association, said he was excited about the “cutting-edge” research being conducted at UF.

“As with many cattle diseases, Anaplasma continues to offer economic challenges to producers,” Handley said. “Any advancement toward the development of a vaccine against Anaplasma offers huge potential for commercial application.”

Researchers say more is understood about the way in which Anaplasma affects the immune system than is known about many human diseases and even many other tick-borne diseases that affect livestock and other animals.

“Yet, despite that knowledge, we still can’t create a vaccine that protects against every strain,” Dark said.

He added that molecular analysis has given researchers useful tools for examining differences between individual organisms, such as information that could be gleaned to yield important epidemiologic information, or determine disease origin.

“We are starting to get into more of the details as to what makes up the organism, but what is the difference between Anaplasma marginale in Florida and in Puerto Rico, and how can we use genetic information to determine where a disease comes from?” Dark said.

“Does every strain from Florida have certain characteristics? Might something work against a disease found in that state but not elsewhere? We have a lot of questions open up when we can look at all these organisms quickly and fairly cheaply at the genetic level, and we can also get more information than we ever have before.”

Sarah Carey, M.A., A.P.R., is director of public relations at the University of Florida College of Veterinary Medicine, a job she has held since 1990. Formerly, she was editor of... END_OF_DOCUMENT_TOKEN_TO_BE_REPLACED