UF study strengthens concerns about long-term use of certain painkillers 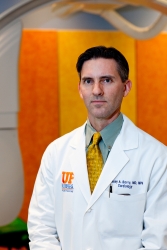 Painkillers such as ibuprofen, naxopren and celecoxib provide needed relief for many patients who have chronic pain. But an ongoing source of contention is whether those drugs and others in their class known as nonsteroidal anti-inflammatory drugs, or NSAIDs, are linked to harmful health effects.

Now a new study from the University of Florida raises the concern about potential risks to a higher degree than before, finding a doubling of deaths from heart attack, stroke and related events among people who have both hypertension and coronary artery disease and use the drugs long term.

The findings, based on data from the international INVEST clinical study of hypertension therapies, are published in the current issue of The American Journal of Medicine.

“It does strengthen our practice recommendations,” said lead author Anthony A. Bavry, M.D., M.P.H., an assistant professor of cardiovascular medicine in the UF College of Medicine’s department of medicine.

Physicians already discourage the use of NSAIDs among the elderly and after heart attacks, on the basis of several studies showing that the drugs are linked with a higher risk of stroke and heart attack.

But the UF researchers, including senior author Carl J. Pepine, M.D., a professor of cardiovascular medicine in the UF College of Medicine, advise patients to talk to their doctors before stopping use of prescribed treatments.

“It’s a tricky issue, because NSAIDs are useful for relieving pain, and that is much of what we do in medicine — alleviate pain and suffering,” said Deepak L. Bhatt, M.D., M.P.H., an associate professor of medicine at Harvard Medical School and chief of cardiology at the VA Boston Healthcare System, who recently published findings that NSAIDs are linked to a higher risk of stroke. “Unfortunately, most medications have some potential side effects, and it’s important to know what those might be.” Bhatt was not involved in the UF study.

Patients who have both high blood pressure and coronary artery disease are generally put on aspirin, a unique type of NSAID, to reduce their risk of a heart attack. Physicians are concerned that giving those patients other NSAIDs for pain relief could cancel out aspirin’s beneficial effects and raise the risk of negative cardiovascular effects.

The UF research team took advantage of the availability of INVEST study data from 882 chronic NSAID users and almost 22,000 intermittent or nonusers to try to settle the question. They looked at patients who reported using NSAIDs over an average of about three years, to see whether there was an increase in adverse events or cardiovascular-related death compared with patients who did not use those pain medicines long term.

The risk of death from cardiovascular causes was 2.3 times higher among patients who chronically used the drugs than among other patients.

NSAIDs are thought to act in a variety of ways to increase cardiovascular risk. They are thought to prevent aspirin’s protective anti-clotting effect by preventing the aspirin from binding properly to platelets in the blood. Some NSAIDs might also increase bleeding risk. In addition, NSAIDs raise blood pressure, thus potentially raising the risk of heart attack and stroke.

Some NSAIDs have already been removed from the market because of concerns about an elevated risk of heart attack and stroke.

While randomized clinical trials are still needed to definitively show a link between NSAIDS and cardiovascular effects, the current study is only the latest in a growing body of research that strongly suggests an association.

“There have been enough studies now that it certainly raises suspicion,” Bhatt said. “The question that’s still open is, is it all NSAIDs, or are some worse than others?”

The UF study did not compare specific NSAIDs, so more research has to be carried out to determine the level of risk that might be associated with each.

The INVEST study was funded by Abbott Laboratories and the University of Florida Opportunity Fund. The National Institutes of Health also provided grant support for several of the researchers. Members of the research team have also received grant funding from, or served as consultants for, a number of pharmaceutical companies.

Science writer for University of Florida’s College of Medicine. Before joining UF in 2008, Czerne was the health and science writer at The State newspaper in Columbia, South Carolina. In... END_OF_DOCUMENT_TOKEN_TO_BE_REPLACED