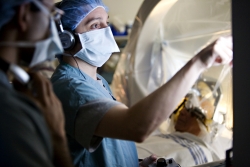 Carefully applying electricity to the brain can reduce tremors and involuntary movements associated with Parkinson’s disease and a wide range of other conditions, and now a new compilation of major research findings and clinical recommendations is available to help guide referring physicians and other clinicians whose patients might benefit from the therapy.

In a paper published Wednesday in The New England Journal of Medicine, University of Florida neurologist Michael S. Okun, M.D., co-director of the UF Center for Movement Disorders and Neurorestoration, describes refinements in the technique, called deep brain stimulation, or DBS, that allow physicians to tailor treatment based on the type and severity of symptoms patients are experiencing.

UF physicians use the approach not just for patients with Parkinson’s disease, but also with Alzheimer’s disease, multiple sclerosis-related tremors, Tourette syndrome and depression, as well as dystonia, which causes excessive movement and abnormal muscle postures. UF is a Tyler’s Hope Center for Comprehensive Dystonia Care, one of the largest dystonia treatment facilities in the world.

“Deep brain stimulation has really undergone an evolution in the last 10-plus years — it’s gone from a crazy notion to put electrodes into the brain … to a cool concept … to something that is now accepted and even has FDA approval,” said Okun, who a decade ago helped pioneer the use of DBS in the treatment of Parkinson’s disease. “We’re entering an era in which therapy is tailored and personalized, rather than a one-size-fits-all approach.”

Deep brain stimulation was approved by the U.S. Food and Drug Administration in 2002 as a therapy for the abnormal movements that characterize Parkinson’s disease. It involves implanting electrodes into the brain and delivering electrical charges that disrupt faulty nerve signals, typically in the parts of the brain that control voluntary movement and posture.

Researchers are not sure just how the therapy acts to reduce Parkinson’s symptoms, but various studies indicate it changes how nerve cells send and receive signals, increases blood flow to affected parts of the brain and stimulates the growth of new nerve cells.

“Though we don’t understand completely how it works, we’re farther down the road than we were before,” said Okun, a member of the McKnight Brain Institute of UF.

After treatment, many patients have experienced improved ability to think and reason, and have gotten rid of tremors, involuntary movements and bothersome twitches that cause emotional distress and limit the ability to carry out daily activities.

“When you select the right candidate for this operation, the benefits can be quite meaningful,” Okun said. “Often patients cry in the operating room when they realize their tremor is gone — it makes even grown men cry.”

An estimated 10 million people around the world have Parkinson’s disease, according to estimates from Parkinson’s research and awareness foundations. About 100,000 of those patients are being treated with deep brain stimulation, according to Medtronic Inc., a leading manufacturer of devices used in the therapy.

In the new paper, Okun offered clinical practice recommendations for the procedure based on a synthesis of the latest research findings in the field, urging physicians to weigh the risks against the benefits for each patient. For example, whereas placement of electrodes in one part of the brain versus another might lead to greater decline in brain function over time, it also might immediately allow the patient to be less dependent on drug therapies.

Deep brain stimulation is not appropriate for every patient. Potential candidates must undergo extensive evaluation. The UF Center for Movement Disorders and Neurorestoration pioneered a one-stop-shop approach in which patients report to a single location and are seen by a large multidisciplinary team that includes specialists in neurology, neuropsychology, neurosurgery, psychiatry, physical therapy, occupational therapy, speech therapy and social work in the course of a single day or two. This team of specialists meets monthly to discuss the results of patient evaluations and devise just the right treatment plan.

“DBS therapy is exquisitely individualized, in that the patient's clinical response to stimulation settings is faithfully observed, documented and acted upon accordingly in the best DBS clinicians’ hands,” said Ludy Shih, M.D., director of the Deep Brain Stimulation program at Harvard’s Beth Israel Deaconess Medical Center, and an assistant professor of neurology at Harvard Medical School who was not involved in the paper. “Therefore it is important for patients and their physicians to know that DBS therapy is best managed by those with proper experience and training.”

Science writer for University of Florida’s College of Medicine. Before joining UF in 2008, Czerne was the health and science writer at The State newspaper in Columbia, South Carolina. In... END_OF_DOCUMENT_TOKEN_TO_BE_REPLACED