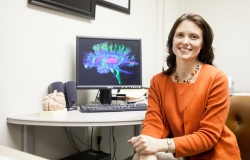 Older adults may be at risk for memory and thinking problems after surgery, and a new $2.3 million grant from the National Institutes of Health’s National Institute of Nursing Research will help University of Florida researchers use brain imaging studies to determine which patients are most likely to be affected.

“Based on our previous studies we believe that there are certain neuro-imaging markers that can tell us which individuals are at greater risk for memory and thinking changes after major surgery,” said Catherine Price, Ph.D., the study’s lead investigator and an assistant professor in the department of clinical and health psychology in the UF College of Public Health and Health Professions. “Ideally we want to eliminate the possibility that anesthesia or surgery can cause a dementia such as Alzheimer’s disease.”

Post-surgery decline in brain function is characterized by subtle changes in memory, in the ability to learn new information and in the ability to do two or more things at the same time while ignoring distractions. About 40 percent of older adults experience such difficulties immediately following major surgery and 14 percent of patients continue to have problems even three months later. Experts don’t know what causes postoperative cognitive changes, but it may be linked to aspects of surgery such as the length of the procedure and type and amount of anesthesia administered. Epidemiological studies suggest that older adults and those with less education are at highest risk.

“While anesthesiologists recognized the occurrence of postoperative cognitive dysfunction many years ago, the problem has only recently received the proper attention it deserves, with experts such as Dr. Price focusing their research efforts in this area,” said Thomas Floyd, M.D., a professor of anesthesiology at Stony Brook University Hospital in New York, who is not involved in the UF study.

Price said one of the best ways to pinpoint who may develop postoperative cognitive dysfunction may be to actually look at patients’ brains using MRI.

For example, certain changes within the brain’s white matter, the tissue through which messages travel across the brain, may indicate the potential for memory and thinking problems that could worsen with surgery.

The UF study will focus on patients undergoing a total knee replacement, one of the most common orthopedic procedures. A half-million Americans receive new knees each year, according to a study published in the Journal of the American Medical Association.

“As our population ages, the growing number of seniors expect to ‘age well’ and many choose to undergo procedures to decrease pain and improve mobility and quality of life … thus the explosion in joint replacement surgeries,” Floyd said. “But a joint replacement will be most effective in patients who do not develop cognitive problems after surgery.”

In the study, supported in part by UF’s Clinical and Translational Science Award from the NIH’s National Center for Advancing Translational Sciences, 80 total knee replacement candidates age 60 and older will receive cognitive testing and MRI brain scans before and after surgery. Using sophisticated imaging methods, the investigators will look for brain biomarkers that are associated with cognitive problems, such as white matter abnormalities and changes to small blood vessels. Researchers will monitor patients up to one year after surgery. Results will be compared with those from a group of 80 individuals of similar age, education and health status, but who are not undergoing surgery.

For the five-year study, Price, a neuropsychologist with a joint appointment in anesthesiology, has assembled a multidisciplinary team with a broad range of expertise in areas such as neuropsychology, neuro-imaging, surgery, anesthesia, geriatrics, biomedical engineering, information technology, biostatistics, biochemistry and molecular biology.

“We believe the current study is going to give us useful information about patient risk factors and surgery variables that we can then apply toward intervention programs,” Price said. “We will eventually be able to identify patients who need extra monitoring or certain anesthetic or surgical procedures, based on pre-surgery brain and cognitive status. This will promote an ideal postoperative recovery even for the most at-risk individuals.”

Jill Pease is the public relations director for the UF College of Public Health and Health Professions. She is responsible for developing public relations and communications strategies to promote the... END_OF_DOCUMENT_TOKEN_TO_BE_REPLACED