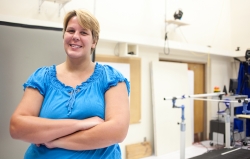 In recognition of her efforts on behalf of patients with Parkinson’s disease, a University of Florida researcher has been honored by a noted national advocacy organization.

Elizabeth Stegemöller, Ph.D., a postdoctoral fellow in the College of Health and Human Performance and the UF Center for Movement Disorders and Neurorestoration, has received the 2012 Parkinson’s Action Network Postdoctoral Advocacy Prize.

Her interactions with patients have inspired her to do all that she can to help make their lives better, she said. Last year she accompanied patients on a daylong trip to the U.S. Capitol to seek the support of senators and house members for Parkinson’s research. She is now galvanizing advocacy efforts among patients and researchers in Florida and her home state of Missouri.

“Elizabeth is particularly unique in her ability to step outside the lab to take a leadership role in this area,” said mentor Chris Hass, Ph.D., an associate professor of applied physiology and kinesiology and a faculty member in the movement disorders center. “I’m ecstatic that she received recognition for the work that she does outside of the lab, because she’s truly dedicated to helping our patients.”

Stegemöller’s advocacy work dovetails with that of the center, which emphasizes the need for researchers to serve as advocates for patients. The center’s community education and philanthropy efforts include holding symposia for patients, caregivers and health professionals; providing expert speakers for support groups; and creating educational video and audio recordings on a range of topics.

“This prize is not about rewarding promising research, but rather, commending scientific researchers for the important role they play in the fight for federal funding and policy support for the 500,000 to 1.5 million Americans living with Parkinson’s disease,” said Parkinson’s Action Network CEO Amy Comstock Rick. “In our advocacy work here in Washington, D.C., we’ve learned that researchers bring a unique perspective and powerful voice to discussions with policymakers, and we hope these prizes encourage more researchers to begin or increase advocacy and community outreach efforts.”

Stegemöller’s honor comes with a $12,500 grant that she can use toward her research and patient advocacy efforts. She plans to use some of it to bring Florida lawmakers to UF for tours of Parkinson’s research laboratories and the Center for Movement Disorders and Neurorestoration.

"It is inspiring when you have a laboratory researcher that takes her work to the next level,” said UF College of Medicine neurologist Michael Okun, M.D., co-director of the UF Center for Movement Disorders and Neurorestoration. “Elizabeth has been tireless in her efforts to inform and to advocate for Parkinson's disease.”

Stegemöller will put some of her prize money toward incentives for study participants, new research equipment and travel to conferences where she presents her research findings.

Her research includes a UF Clinical and Translational Science Institute-funded study of brain changes linked with increasing difficulty of performing repetitive finger movements. And reaching to her training as a music therapist, Stegemöller is conducting another study of whether singing can help improve voice volume and swallowing ability in patients who have Parkinson’s disease.

All her efforts, both inside and outside the laboratory, are ultimately aimed at helping improve the health and quality of life of the patients she has the opportunity to meet from day to day.

“Our job is to make people’s lives better in all aspects of what we do,” Hass said. “We can only touch so many lives with our research, but we can expand those numbers extensively by being involved in action-based community work.”

Science writer for University of Florida’s College of Medicine. Before joining UF in 2008, Czerne was the health and science writer at The State newspaper in Columbia, South Carolina. In... END_OF_DOCUMENT_TOKEN_TO_BE_REPLACED