The best way to prevent the spread of COVID-19 is to get vaccinated. You can get a vaccine in many places in your community. Find a walk-up location or schedule an appointment today. END_OF_DOCUMENT_TOKEN_TO_BE_REPLACED

Published: Feb 18, 2013 By: By Emily Miller Category: University of Florida, College of Medicine, Department of Community Health and Family Medicine 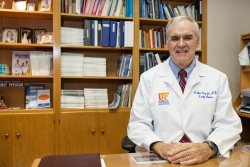 His bold red tie rests adjacent to three pens and a pair of reading glasses tucked snuggly into the pocket of his white button down dress shirt. A name badge with the word “DOCTOR” sits on the other side.

Bookshelves line the back wall of his office, proudly displaying photographs of his wife, son, daughter and three granddaughters, and a collection of Florida Gator coffee mugs. Coffee is his drug of choice after all.

R. Whit Curry Jr., M.D., is a professor and the chair of the UF College of Medicine department of community health and family medicine. He will step down in 2013 after 20 years as chair, but this is not the last the department will see of him.

“I’m not going to retire. I’m going to continue working and to see patients and teach, and I actually hope I’m going to be more involved in the residency program,” said Curry, who twice has been named the UF College of Medicine’s Family Practice Program Teacher of the Year. “What I’m giving up is the administrative side of running the department.”

Born in Bradenton and raised in Orlando, Curry said there was no specific reason for his stepping down.

“When I got my Medicare card a few years ago that was kind of a sign to me that I needed to start thinking about stepping down and 20 years just seems like it’s been long enough,” he said. “It’s time for someone else to take charge.”

Although Curry grew up in a medical family — his father was a radiologist in Orlando — he did not discover his passion for medicine until college.

“I originally thought I was going to be an engineer and always liked to fix things and work on things, and once I got in college, I realized that medicine offered the possibility of a career that combined both the humanity and the science side of things,” said Curry, who’s been on the UF faculty since 1976. “I wanted both of those.”

Board-certified by the American Board of Internal Medicine and the American Board of Family Practice, Curry has numerous publications to his credit, including two books. He also has been listed repeatedly in “The Best Doctors in America,” “Who’s Who in Medicine” and “Guide to America’s Top Physicians,” and he serves as the medical adviser of UF’s daily consumer health series “Health In a Heartbeat,” which airs on public radio stations across the country.

Curry said his greatest accomplishment during his 20 years as chair was leading the effort to build the new Family Medicine at Main practice, which opened in June.

“The new building offers us an ability to see a lot more patients, to train more residents in family medicine, to train medical students in a better fashion, and to better serve the community,” he said.

Curry said his responsibilities changed when he became chair, and that his job became more about supporting his faculty and staff. He hopes after stepping down he will have more time for his family, students and patients.

“Things happen when they happen — nights, weekends. It’s pretty unpredictable,” he said. “I’d like to be more available to my granddaughters and son. What I hope to do is to do a little more patient care and to do a little more direct teaching and to be more involved directly in both our inpatient and outpatient areas.”