UF Health to resume elective surgeries, procedures on Monday, May 4. For more information on our ongoing response to COVID-19 in Gainesville, Jacksonville and Central Florida, visit our coronavirus website. END_OF_DOCUMENT_TOKEN_TO_BE_REPLACED

UF alum will focus on research, recruitment as new chair of pharmacology and therapeutics 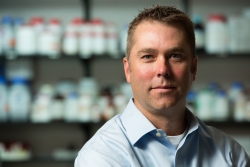 Jeffrey R. Martens, Ph.D., has been appointed chairman of the department of pharmacology and therapeutics at the University of Florida College of Medicine.

“We at UF Health are fortunate to welcome Dr. Martens back to his alma mater. He is a leading researcher in the field of pharmacology and a deeply committed educator and mentor,” said David S. Guzick, M.D., Ph.D., senior vice president for health affairs and president of UF Health. “Like the field of pharmacology itself, which is a bridge between basic and clinical science, the department he will lead strives to promote research that impacts the health of our citizens, foster interactive research programs with other departments and colleges, and educate students through multidisciplinary research.”

Martens is currently an associate professor of pharmacology and chairman of the pharmacology graduate program at the University of Michigan. He will begin his new role Jan. 1.

“Dr. Martens brings not only his impressive personal research efforts in neurosensory and cardiovascular pharmacology to UF, but tremendous leadership energy and skills that will build on the department’s great legacy and move it forward nationally and internationally,” said UF College of Medicine Dean Michael L. Good, M.D.

Martens received his Ph.D. from UF in 1998 and completed his postdoctoral fellowship at Colorado State University in 2001, studying ion channels in the cardiovascular system. He was appointed to the University of Michigan faculty in 2004 and received tenure in 2009.

At the University of Michigan, Martens also served as the director of graduate recruiting for pharmacology and co-director of the pharmacology development committee. He is a participant on six federally funded training programs.

He currently holds more than $7 million in research grants from the National Institutes of Health, as well as from other public and private organizations. He successfully established his own research program at the University of Michigan, where he pursues therapeutic approaches to treat atrial fibrillation and curative therapies for anosmias, or loss of the ability to perceive odors and olfactory dysfunction.

“Dr. Jeff Martens brings a very strong research program, strong administrative skills and a commitment to medical and graduate student education to the department of pharmacology and therapeutics,” said Stephen Sugrue, Ph.D., the senior associate dean for research affairs in the College of Medicine.

In 2012, Martens won the Faculty Recognition Award from the University of Michigan and in 2007 he won the Polak Young Investigator Award from the Association for Chemoreception Sciences. He is also a member of several national and international professional societies, including the Society of General Physiologists, the American Physiological Society and the Society of Neuroscience.

It is a privilege to assume a legacy established by the previous chairs who have led the pharmacology department, Martens said.

“I am honored to return to my alma mater to lead a dedicated group of faculty and staff who are building a world-class pharmacology department,” he said. “The growth potential at UF is tremendous, and I am extremely excited to be part of the university and medical school at this time.”