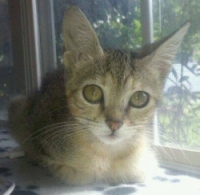 If cats really have nine lives, Cora – who has thus far survived an osprey’s talons after being taken from her mother at 3 weeks of age and a rock fragment lodged in her windpipe – has seven more remaining. Thankfully, at 3 years of age, she’s got plenty of time to live them out.

Jacksonville resident Barbara McMasters, Cora’s owner, said she will be forever indebted to her veterinarian, Moody McCall, D.V.M., at San Pablo Animal Hospital, and specialists at the University of Florida Small Animal Hospital, for giving her cat its most recent reprieve.

McCall referred McMasters to UF Health after she came to his clinic with her cat. Cora showed signs of difficulty breathing and was behaving “as if she was having an asthma attack and was in serious respiratory distress,” McMasters said. In addition, Cora was throwing herself on the ground and collapsing.

“I couldn’t bear to watch her suffer,” McMasters said. “I was so afraid I was going to have to put her down, and I was truly desperate.”

Radiographs revealed a foreign body in the trachea ― a medical problem McCall knew he couldn’t solve. Only a trained veterinarian with access to a flexible endoscope could attempt treatment, and he knew UF had the tools and the expertise to help Cora.

“This is the first time I’ve seen a foreign body in the windpipe in 27 years of practice,” McCall said.

Specht said the initial radiographs taken by McCall “made it clear what the problem was, and what we needed to do about it.

“We still couldn’t say exactly what the foreign material was, but we knew it was a foreign object,” he said. “It turned out to be a fragment of rock. The endoscope was used so that we didn’t have to perform surgery.” The endoscope is flexible and can be inserted alongside a small catheter that provides oxygen, he said.

“It has an interior channel through which a small grasping forceps was inserted and used to grab the stone and pull it out,” Specht said. “This is a fairly well-established use of the scope equipment, although respiratory foreign bodies are relatively uncommon.”

The procedure took about 30 minutes, Specht said. Although it was successful, the cat remained in the hospital’s intensive care unit overnight to ensure a complete recovery.

Cora, meanwhile, is doing “fantastic,” said McMasters, who rescued Cora when she was a baby after she was dropped by a low-flying osprey.

The cat is back to her normal routine, which includes playing with her best friend, the family’s springer spaniel, Daisy.

“I can’t say enough about Dr. McCall and UF, specifically Dr. Specht, Dr. Harris, Ashley Corlew and all those who were involved in Cora’s recovery while she was in the ICU,” McMasters said. “They were the only ones who could help me. Words cannot even begin to express my deepest and most heartfelt appreciation for what you do, but also for the genuine care and compassion shown to Cora and my family before, during and after the surgery, and even after we returned to Jacksonville.”

Sarah Carey, M.A., A.P.R., is director of communications at the University of Florida College of Veterinary Medicine, a job she has held since 1990. Sarah holds a master’s degree in... END_OF_DOCUMENT_TOKEN_TO_BE_REPLACED