UF Health to resume elective surgeries, procedures on Monday, May 4. For more information on our ongoing response to COVID-19 in Gainesville, Jacksonville and Central Florida, visit our coronavirus website. END_OF_DOCUMENT_TOKEN_TO_BE_REPLACED

Learning to save lives: 850 high-schoolers take hands-only CPR course in one day 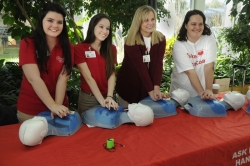 How do you convince an entire high school student body to learn hands-only CPR? Let the students do the teaching.

That was the strategy juniors Nikki Vukich and Erin Coonan came up with to motivate 850 Episcopal School of Jacksonville schoolmates to participate in the life-saving training recently.

The daughter of UF Health Jacksonville Chief Medical Officer David Vukich, MD, Nikki was determined to get her school involved when she learned about UF’s initiative to train 80,000 people in what is also known as bystander CPR.

The goal was initiated by Joseph Sabato Jr., MD, a University of Florida College of Medicine –Jacksonville assistant professor of emergency medicine and director of field operations and disaster management.

Sabato said lack of CPR training is a national problem. Only 25 percent of people who suffer cardiac arrest receive CPR before emergency crews arrive. The 75 percent who don’t have very little chance of survival. So Sabato came up with a plan to train enough people to fill EverBank Field. Sabato and Cynthia Gerdik, RN, UF Health Jacksonville’s director of critical care, are working with a core group of UF volunteers to teach CPR all over the First Coast, intent to reverse the trend locally.

Every year, roughly 1,000 people go into cardiac arrest on the First Coast, and only about 5 percent survive. Survival rates could increase to 15 to 20 percent with the help of the CPR initiative. Other areas that made a major push for training – including the Seattle area and the state of Arizona – saw changes of that magnitude.

The Take Heart First Coast initiative, headed by UF Health and the First Coast EMS Advisory Council, has reached 14,000 people so far, and that number is about to increase.

In the past, CPR involved alternating between pumping on the victim’s chest and giving the person mouth-to-mouth resuscitation. But researchers found hands-only CPR, which eliminates mouth-to-mouth, is more successful in those first critical minutes after someone goes into cardiac arrest. Since the body already has a supply of oxygen that will last about six minutes, the idea is to offer continuous assistance in pumping the heart rather than interrupting pumping it for mouth-to-mouth.

At Episcopal School of Jacksonville, 35 students signed up to come to school on a Saturday to learn CPR – and how to teach it to others – with instructors from UF. Then on the schoolwide training day, those volunteers took over teaching in all of the high school’s science classes. They lectured, showed videos and slides, and then broke the classes into groups to practice on dummies.

“When someone goes into cardiac arrest, the heart suddenly stops working. It only takes six minutes before that causes damage to your brain and body,” junior Hodson Wood told classmates during one of the sessions. “That’s why CPR is so important. So you can buy more time while you wait for EMS to arrive.”

Another student, junior Michael Himebauch, assured the class the hands-only method is less intimidating than the previous way CPR was taught.

“With rescue breathing, you might be afraid of catching a disease or something or think it’s gross,” he said. “Now it’s just three steps. Check if the person is unresponsive, call 911, and then start compressions in the center of the chest.”

He advised compressing to the beat of the Bee Gees song “Stayin’ Alive” or using a phone app called CPR Tempo to meet the ideal range of 100 beats per minute (BPM). He told the students to put their phones on speaker so they could begin CPR during their 911 call if they don’t have anyone to assist them.

In another classroom, sophomore Kieran Wallace stressed that CPR requires strength, because the chest should be pressed down about 2 inches during each compression.

“You could break or crack the person’s ribs, but don’t stop. That means you’re doing it right,” he said.

Sabato and emergency medicine resident Trevor Smith, MD, sat in on some of the classes and shared some additional tips: