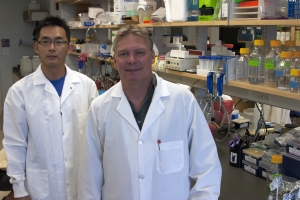 The famous slogan is “A diamond is forever,” but that phrase might be better suited to herpes: Unlike most viruses, which succumb to the immune system’s attack, herpes remains in the body forever, lying in wait, sometimes reactivating years later.

Researchers have long wondered what causes herpes viruses — two strains of which are linked to cancer — to reactivate after remaining dormant once the initial infection resolves. Now a team of researchers, including two University of Florida scientists, has discovered that interactions with other infections later in life can trigger these dormant viruses to resurface and cause disease.

Understanding more about how specific pathogens interact with each other could help scientists devise new and better ways to combat these infections and the diseases they cause, the researchers write in a paper published today (June 26) in the journal Science.

“Probably 95 percent of us have been infected with at least one herpes virus, but many people never have a problem with it,” said study co-author Rolf Renne, Ph.D., a professor of molecular genetics and microbiology in the UF College of Medicine and a member of the UF Genetics Institute and the UF Health Cancer Center. There are eight herpes viruses that infect humans, causing diseases that range from cold sores and chickenpox to mononucleosis and cancer. “The question has been: What happens to reactivate these viruses to cause disease?”

Led by researchers at the Washington University in St. Louis, the study found that parasite infections later in life can spark an immune reaction that clears the way for the herpes virus to reactivate. In this case, the scientists were studying a specific herpes virus linked to a form of cancer called Kaposi sarcoma, human herpes virus 8.

The researchers discovered that after initial infection by the virus, a protein called interferon gamma keeps herpes in check, which explains why the virus typically remains dormant in the body. But when the immune system later responded to an infection with a parasitic worm called a helminth, another protein called interleukin 4 was released, which not only blocked interferon gamma from doing its job but also directly activated virus replication. When the virus replicates, it infects new cells, increasing the chances a cancerous tumor will form, Renne said.

“The fact that the virus can ‘sense’ the immune reaction to a worm and respond by reactivating is a remarkable example of co-evolution,” said senior author Herbert W. Virgin IV, M.D., Ph.D., of Washington University in St. Louis. “We think other interactions between multiple infectious agents and the immune system will be discovered over time that we will view as similarly sophisticated or maybe even devious. Understanding these interactions will help us survive in a complex microbial world.”

The Washington University in St. Louis researchers made the discovery first by studying a mouse herpes virus. UF researchers were able to duplicate these findings in human cells infected with the Kaposi sarcoma-associated herpes virus.

Infections with the helminth parasite occur frequently in developing countries, including sub-Saharan Africa, where cases of Kaposi sarcoma are also particularly common.