The best way to prevent the spread of COVID-19 is to get vaccinated. You can get a vaccine in many places in your community. Find a walk-up location or schedule an appointment today. END_OF_DOCUMENT_TOKEN_TO_BE_REPLACED

UF researchers discover how to cultivate norovirus in human cells 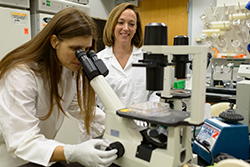 Noroviruses are pernicious intestinal viruses. They cause violent vomiting and diarrhea, and people ill with the virus remain contagious up to three days after they seem to recover.

Although a vaccine for these viruses is in clinical trials, there is still no medication to combat them. That’s in part because researchers have not been able to culture human noroviruses so they can test potential treatments — until now, according to a study by University of Florida Health researchers published Friday, Nov. 7 in the journal Science.

UF Health researcher Stephanie Karst, Ph.D., has found a way to grow a human norovirus by identifying a cell it targets in the intestine.

“The biggest hurdle to doing norovirus research for its entire history — it was discovered in 1972 — has been that we can’t culture the human viruses in a cell culture dish,” said Karst, an associate professor in the department of molecular genetics and microbiology in the UF College of Medicine. “That complicates every aspect of research. We can’t study how it replicates, we can’t test therapeutics and we can’t generate live virus vaccines.”

According to the Centers for Disease Control and Prevention, in the United States, human noroviruses cause 19 to 21 million cases of illness per year, and contribute to 56,000 to 71,000 hospitalizations and 570 to 800 deaths, mostly in young children and older adults. Noroviruses are resistant to many common disinfectants. Very little of the virus is needed to infect a host, so a surface may still contain enough virus to infect a person even after it is cleaned.

Previously, researchers speculated that noroviruses primarily target intestinal epithelial cells, which line the intestine and protect it from pathogens, Karst said. However, this new research demonstrates that the virus targets B cells, a type of white blood cell common in the intestine.

Researchers also were surprised to find that bacteria present in the body’s gut flora, also known as commensal bacteria, helped the human norovirus infect B cells. Karst said scientists have long known that noroviruses need a particular kind of carbohydrate to infect cells.

“What we’ve shown is that noroviruses attach to that carbohydrate expressed on commensal bacteria, and that this interaction stimulates viral infection of the B cell,” Karst said. “This is a really exciting, emerging theme. A variety of intestinal viruses seem to exploit the bacteria that are present in our intestines all the time. These viral infections are enhanced by the presence of bacteria in the gut.”

UF research scientist Melissa Jones, Ph.D., a co-author on the paper, said the idea to study B cells came from Karst’s research on mouse noroviruses. UF scientists detected virus in Peyer’s patches, pockets of lymphoid nodules that line the intestine and survey the organ for pathogens.

This system can now be used to study norovirus replication and assess effectiveness of therapeutics and disinfectants, though more work needs to be done to increase its efficiency. Karst and Jones said while this is the first time researchers have been able to culture a human norovirus, the virus does not replicate to high levels in the current system, which hinders growth of the virus in the laboratory.

Science writer for UF Health. Morgan writes about the research of faculty physicians in the College of Medicine. She joined the UF Health staff in 2014. A Michigan native, she... END_OF_DOCUMENT_TOKEN_TO_BE_REPLACED