UF Health to resume elective surgeries, procedures on Monday, May 4. For more information on our ongoing response to COVID-19 in Gainesville, Jacksonville and Central Florida, visit our coronavirus website. END_OF_DOCUMENT_TOKEN_TO_BE_REPLACED

Beloved bovine recovering at home after surgery at UF 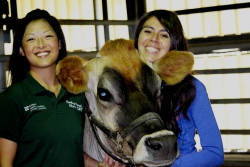 An 11-year-old Jersey cow named Penny is back to eating apples and helping to educate children about farm life thanks to surgery performed recently at the University of Florida’s Large Animal Hospital to remove a mass in her udder.

A beloved icon for visitors to the Living History Farm at Morningside Nature Center, which is operated by the city of Gainesville, Penny is also a valuable educational resource and an integral part of the center’s farm programs, said Charlie B. Way, Morningside’s recreation leader and farm manager. At Morningside, Penny helps visitors learn about how bovines were an indispensable part of a late 1800s Florida farm — from milk production to garden fertilizer.

“Today, many children or adults have little chance for interaction with the farm animals that were a daily part of our ancestors’ lives,” Way said.

Penny is no stranger to UF veterinarians, who have seen her many times over the years, said Myriam Jimenez, D.V.M., a resident with UF’s Food Animal Reproduction and Medicine Service, or FARMS.

“About a year ago, she was treated for mastitis on her right rear quarter, probably due to biting flies,” Jimenez said. “She received treatment, including a teat amputation for her mastitis, but unfortunately the problem worsened into an abscess within her udder.”

Jimenez said UF veterinarians tried to resolve Penny’s infection with a variety of treatments that were not successful.

“Carley came to FARMS for her last month of clinical rotations and met Penny,” Jimenez said. “At the time, we were discussing how we might proceed with an approach closer to surgery. Carley took it upon herself to take pictures, which she shared with Dr. David Freeman, chief of the UF large animal surgery service, as well as with our anesthesia team.”

Trcalek said she took an instant liking to Penny after first meeting her.

“She’s a very sweet cow with a lot of personality,” Trcalek said. “Another reason I became so involved was the staff at Morningside. They are so dedicated to Penny and that was really inspiring. Their dedication and Penny’s winning personality really motivated me to help her as much as I could.”

After meeting Penny and realizing surgery was being considered, Trcalek consulted with various team members in surgery and anesthesia to get their opinions as to how well this option might work.

“I thought, we have access to the best of the best in these fields, why not take advantage,” Trcalek said.

The UF team came up with a solid surgical and anesthesia plan and a cost proposal, which was then proposed to the Morningside staff. Morningside agreed to move forward and Penny was scheduled for her much-needed surgery on May 8.

The procedure, which took about two hours, was conducted by Valeria Albanese, D.V.M., a UF large animal surgeon.

“Both the surgery and the anesthesia were fairly involved, and I am extremely grateful to the team that made this happen,” Trcalek said. “I felt like the whole thing was such an awesome collaborative effort between FARMS, surgery, anesthesia and Morningside. I am proud to be a part of such a wonderful team.”

Penny was able to go home May 10 and is now receiving antibiotic treatment.

“She’s healing well,” Jimenez said. “She has a bit of expected swelling on her right leg due to the extension of the mass removal, but she is in good spirits and eating her apples as always.”

Jimenez added that she expects Penny to make a full recovery.

“We owe everyone on the UF veterinary team a huge debt of gratitude,” Way said.

Sarah Carey, M.A., A.P.R., is director of public relations at the University of Florida College of Veterinary Medicine, a job she has held since 1990. Formerly, she was editor of... END_OF_DOCUMENT_TOKEN_TO_BE_REPLACED