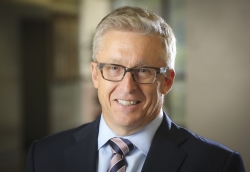 A UF Health researcher and his colleagues have discovered an association between increased intake of omega-3 fatty acids found in fish and fish-oil supplements and a decreased risk of developing rheumatoid arthritis in people at risk for the disease.

The study is the first of its kind to find an association between omega-3 and the autoantibodies that lead to rheumatoid arthritis, or RA, among patients who are at risk but have yet to develop the disease.

People with a family history of RA who consumed more omega-3 were less likely to have certain autoantibodies that precede the disease’s development, researchers found. Autoantibodies are immune proteins that mistakenly target the body’s tissues and organs. The findings were published recently in the journal Rheumatology by researchers including Michael J. Clare-Salzler, M.D., a professor and chairman of the department of pathology, immunology and laboratory medicine in the UF College of Medicine.

While it was a small number of study subjects, the results suggest that omega-3 may help protect against RA by impeding its development during the period before symptoms emerge, according to the researchers. Omega-3 is found in cold-water fish such as salmon or mackerel as well as in dietary supplements derived from fish or algae.

“If you’re consuming more omega-3 during an earlier phase of disease, you may block its progression to a phase where active inflammation manifests,” Clare-Salzler said.

Rheumatoid arthritis arises when the body’s immune system causes inflammation in the tissue that helps joints move, sometimes leading to cartilage damage or loss. About 1.5 million people in the United States have RA and women are three times more likely than men to be affected, according to the Arthritis Foundation.

“We wanted to know if patients with a higher omega-3 intake have a lower risk for developing RA. Generally, what we’re finding is that omega-3 is effective in blocking the RA antibodies,” Clare-Salzler said.

While further study is needed, two of the crucial omega-3 fatty acids, DHA and EPA, may do their beneficial work by suppressing a particular protein that regulates the intensity and duration of the immune response, researchers said.

Genetics may also play a role in the ultimate effectiveness of omega-3 in individual patients who at risk of developing RA, said Jill Norris, Ph.D., a professor in the department of epidemiology at the Colorado School of Public Health and the study’s principal investigator.

But food alone may not be enough to obtain beneficial effects because modern farming practices have lowered the amount of omega-3 in many foods by as much as 40-fold since the 1900s.

“There was a very substantial difference in the blood levels of omega-3 fatty acids between the people who took omega-3 supplements and those who did not,” Norris said.

A healthy, balanced diet that includes fish rich in omega-3 fatty acids, as well as taking 1 to 3 grams of fish oil a day, is a good idea for those who may be at risk for RA and perhaps other inflammatory diseases.

“If you do that, your risk for developing those diseases is probably going to be less,” Clare-Salzler said.

Next, Norris said she would like to obtain funding to track a larger group of patients over a longer period of time, including those with the RA autoantibody to see how the disease progresses.

The research was supported by multiple grants from the National Institutes of Health and the Walter S. and Lucienne Driskill Foundation. Researchers from seven universities and research institutions collaborated on the work.

Doug Bennett joined the UF Health staff in January 2015 as a science writer and editor. His topic areas include anatomy; biochemistry and molecular biology; molecular genetics and microbiology; pathology,... END_OF_DOCUMENT_TOKEN_TO_BE_REPLACED