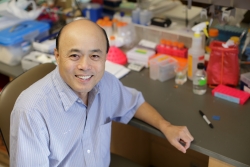 A University of Florida Health researcher has found a simple, rapid way to treat an immune-related disorder in mice, an approach that could eventually help multiple sclerosis patients after further research.

The process attaches disease-related protein fragments called autoantigens to spleen cells to prevent a disease known as experimental autoimmune encephalomyelitis, or EAE, which causes brain and spinal cord inflammation in animal models. EAE is commonly used in research because it mimics some of the traits of multiple sclerosis in humans.

MS is a disorder in which the immune system attacks brain, spinal cord and optic nerves, damaging the fatty substance that “insulates” nerve fibers and interrupting nerve impulses. An estimated 400,000 people in the United States and 2.5 million people worldwide have the disease, according to the Multiple Sclerosis Foundation.

An infusion of spleen cells coupled with an autoantigen completely prevented EAE in a mouse model, said Chang-Qing Xia, M.D., Ph.D., a research assistant professor in the UF College of Medicine’s department of pathology, immunology and laboratory medicine. The same method also “dramatically reversed” the disease in its early stages, researchers found. The findings were published recently in the Journal of Immunology Research.

The approach used to treat autoimmune diseases isn’t new. But Xia and his collaborators from Capital Medical University in China coupled the autoantigens to the spleen cells using a different chemical known as sulfo-SMCC, or SMCC, that is already approved by the U.S. Food and Drug Administration for drug delivery in several clinical trials. Compared with the previously reported autoantigen-coupling method known as EDCI, this method makes the process faster, easier and less toxic to cells, Xia said.

While EAE in animals isn’t identical to MS, Xia said there are enough similarities to believe that the same immunotherapy approach could eventually be used to treat humans.

“The most important thing is that these findings are highly translatable to the clinic,” Xia said.

This is how the process works: Protein fragments of the nerve insulation substance known as myelin are coupled with spleen cells and injected into mouse models. After more than two months, researchers found that the treatments had completely prevented EAE from developing. Likewise, the same approach also reversed EAE in its early stages. Researchers believe that the spleen cell-autoantigen combination activates the production of helpful immune system cells while suppressing the disease-causing activities of other cells linked to autoimmune diseases.

While no clinical trials have been scheduled, Xia said his new approach shows potential for making the leap from the laboratory to the clinic. Sulfo-SMCC, the chemical used to bind the autoantigen to spleen cells, has already been used for drug delivery in some clinical trials. Because the chemical is already in use, that could shorten the amount of time needed to get the new process tested in humans, Xia said.

If used in humans someday, it’s likely the protein fragments known as autoantigens would be coupled to peripheral white blood cells and delivered by transfusion. The same principle that makes the autoantigen therapy effective against EAE in mice should be able to benefit humans, according to Xia.

“If it works on EAE, it also should work on MS because the two diseases are similar immunologically and pathologically,” he hypothesized.

Next, Xia said he hopes to move the method into clinical trials if he can get other researchers interested in trying the technique.

Funding for the research was provided by two grants to Xia from the National Natural Science Foundation of China.

Doug Bennett joined the UF Health staff in January 2015 as a science writer and editor. His topic areas include anatomy; biochemistry and molecular biology; molecular genetics and microbiology; pathology,... END_OF_DOCUMENT_TOKEN_TO_BE_REPLACED