UF Health to resume elective surgeries, procedures on Monday, May 4. For more information on our ongoing response to COVID-19 in Gainesville, Jacksonville and Central Florida, visit our coronavirus website. END_OF_DOCUMENT_TOKEN_TO_BE_REPLACED

A life in images 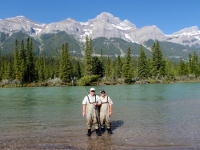 Beyond the aqua blue river, the evergreens stood sentry, backed by snow-capped mountains. This was summertime along the Rocky Mountains in the Canadian province of Alberta. Of course, spectacular views weren’t the only reason UF Health radiologist Barry McCook, M.D., was visiting the picturesque province. He was there for the fly-fishing, an activity that’s become his and his son’s favorite hobby.

McCook, an associate professor and chair of radiology at the College of Medicine – Jacksonville, speaks with enthusiasm about these outdoor adventures as well as his other interests, such as Southern rock ’n’ roll. But when it comes to his profession, the passion is even greater.

While an assistant professor at the University of Pittsburgh School of Medicine, McCook played a key role in the development of the PET-CT scanner, which uses positron emission tomography and X-ray computed tomography capabilities to create more precise images of metabolic and biochemical activity. He was one of two radiologists who interpreted images as part of the National Institutes of Health-funded study that led to University of Pittsburgh Medical Center becoming the first entity to use PET-CT scan for clinical evaluations. Now the technology is used at hundreds of medical centers around the world.

“It has revolutionized the care of cancer patients,” said McCook, who specializes in diagnostic and nuclear radiology.

After 10 years at Pitt, McCook accepted the opportunity to move back to his hometown and direct the diagnostic radiology residency program at the College of Medicine – Jacksonville. Three years later, in 2011, McCook became department chair. Today, the faculty represents a host of subspecialties such as cardiovascular, musculoskeletal and pediatric imaging, among other divisions.

When he’s not busy guiding the radiology program, McCook enjoys delving into a few hobbies. A few times a month, he and his son go fishing, usually for trout or redfish along the Intracoastal Waterway.

That sport has also been the focal point of a few long-distance family vacations. One such getaway was an excursion to the town of Banff in Alberta, Canada. McCook loves to reflect on the breathtaking views of the snow-capped Canadian Rockies while they fished along the ever-clear Bow River. The sounds of nature took precedence over the hustle and bustle of city life miles away.

Then there’s McCook’s artistic side. McCook is a huge fan of Southern rock and country music and has developed a penchant for the classical guitar. He looks forward to practicing every day.

“I needed something to zone out to when I get home. The guitar has been a real release for me,” he said. “It’s a lot of fun.”

Although he’s been plucking strings more frequently lately and has personal, old-neighborhood ties to members of famed rock bands 38 Special and Lynyrd Skynyrd, McCook doesn’t see himself launching a second career as a guitarist. His work in radiology keeps him quite busy, satisfied and happy, and UF Health remains happy to have him.