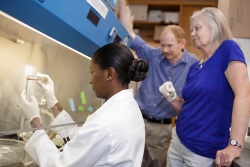 For decades, saccharin was wrongly labeled as a possible cancer-causing chemical. Now, nearly 15 years after being declared safe, University of Florida Health researchers have found that the artificial sweetener can inhibit cancer cell growth.

Saccharin shows considerable promise for its ability to inhibit an enzyme upregulated in many cancers, helping tumor cells survive and metastasize, said Robert McKenna, Ph.D., a professor of biochemistry and molecular biology in the UF College of Medicine. After testing its effectiveness on cancer cells, researchers believe saccharin could eventually lead to the development of drugs that treat highly aggressive cancers affecting the breast, liver, prostate, kidney and pancreas. The findings were published recently in the journal Bioorganic & Medicinal Chemistry and are being presented Wednesday at the American Chemical Society convention in Denver.

The discovery might never have happened if not for Brian Mahon, a curious UF graduate research assistant. He wanted to know how saccharin might affect the enzyme, carbonic anhydrase IX, which is found in aggressive cancers. But Mahon didn’t want to wait a week for an order of pure saccharin to arrive at the lab. He bounced an idea off Jenna Driscoll, an undergraduate student majoring in microbiology and nutritional science, and Mam Mboge, a graduate student who had just joined the lab.

“So we just went to a coffee shop and got some Sweet ‘N Low. I said, ‘Let’s just try it’ and we did and collected some data,” Mahon recalled.

After doing some initial experimenting, the researchers are collaborating with Susan Frost, Ph.D, a professor of biochemistry and molecular biology, to look at saccharin’s effect on breast cancer cells.

“Mam literally took Sweet ’N Low and saccharin and showed that the rate of growth of the cancer cell slows down when you added it,” said McKenna, the paper’s lead author and Mahon’s mentor.

The saccharin disrupts carbonic anhydrase IX’s ability to regulate the cancer cell’s pH level — its hydrogen ion concentration. That ultimately makes it harder for the cancer cell to grow and metastasize, researchers found.

Targeting carbonic anhydrase IX is also an attractive option because it’s not expressed in most other cells throughout the body, meaning that healthy tissue should remain unaffected even as cancer cells are weakened, McKenna said.

Any saccharin-based drugs would probably be used in conjunction with traditional cancer treatments such as chemotherapy and radiation, according to the researchers. A saccharin drug would slow the cancer’s growth, providing the opportunity for radiation or chemotherapy to be more effective at killing off the cancer cell.

The irony of a chemical that was once labeled a potential carcinogen now having potential as an anti-cancer agent wasn’t lost on the research team. Studies in the 1970s linked saccharin to bladder cancer in laboratory rats, according to the National Cancer Institute. Congress ordered further study and passed a law in 1977 that mandated a warning label. Later studies found that the cancer incidence in rats was irrelevant to humans, leading to a repeal of the labeling requirement in late 2000. The U.S. Food and Drug Administration declared saccharin safe for consumption the following year.

“The public only remembers the negative attention. Saccharin was seen as the bad guy and it’s definitely not the bad guy. It may actually be a good guy,” McKenna said.

The researchers want to further test saccharin’s effectiveness in cancer cells and eventually move to mouse models. This summer, they plan to submit grant requests that will allow additional study and build on the data that have been acquired, McKenna said.

Doug Bennett joined the UF Health staff in January 2015 as a science writer and editor. His topic areas include anatomy; biochemistry and molecular biology; molecular genetics and microbiology; pathology,... END_OF_DOCUMENT_TOKEN_TO_BE_REPLACED