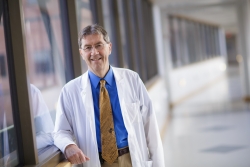 The mechanism that causes high-performance athletes to “feel the burn” turns out to be the culprit in what makes people with chronic fatigue syndrome feel exhausted by the most common daily activities, new University of Florida Health research shows.

Published in the February issue of the journal Pain, the study shows that the neural pathways that transmit feelings of fatigue to the brain might be to blame. In those with chronic fatigue syndrome, the pathways do their job too well.

The findings also provide evidence for the first time that peripheral tissues such as muscles contribute to feelings of fatigue. Determining the origins of fatigue could help researchers develop therapies or identify targets for those therapies.

Researchers focused on the role of muscle metabolites, including lactic acid and adenosine triphosphate, or ATP, in the disease. The study has demonstrated for the first time that these substances, released when a person exercises his or her muscles, seem to activate these neural pathways. Also, UF Health researchers have shown that these pathways seem to be much more sensitive in patients with chronic fatigue syndrome than in patients without the disease, something that hasn’t been studied before.

Chronic fatigue syndrome, which the Institute of Medicine recently renamed systemic exertion intolerance disease, or SEID, is characterized by extreme chronic fatigue. Because its chief symptom — fatigue — is often associated with many other diseases, it can be difficult to diagnose SEID for the more than 1 million people who actually have the disease, according to the Centers for Disease Control and Prevention. The disease has no root medical cause, and researchers don’t know what triggers it. But they are studying aspects of the disease to figure out ways to treat it.

“What we have shown now, that has never been shown before in humans, is that muscle metabolites can induce fatigue in healthy people as well as patients who already have fatigue,” said Roland Staud, M.D., a professor of rheumatology and clinical immunology in the UF College of Medicine and the paper’s lead author.

During exercise, muscles produce metabolites, which are sensed by metaboreceptors that transmit information via fatigue pathways to the brain, according to the researchers. But in patients with SEID, these fatigue pathways have become highly sensitive to metabolites and can trigger excessive feelings of fatigue.

“For most of us, at the end of strenuous exertion we feel exhausted and need to stop — but we will recover rapidly,” Staud said. “However, these individuals tire much more rapidly and sometimes just after moving across a room, they are fully exhausted. This takes a toll on their lives.”

Staud and co-author Michael E. Robinson, Ph.D., a professor in the department of clinical and health psychology in the UF College of Public Health and Health Professions, recruited a group of 39 patients with SEID and 29 participants without the disease. The researchers asked the participants to don a blood pressure cuff just above their elbows on their dominant side, pick up a spring-loaded device and squeeze it to 100 percent of their maximum capacity, which was measured by a dial.

With research assistants encouraging them, the study participants then squeezed the device so that the dial showed they were gripping at 50 percent of their maximum capacity for as long as they could.

At the end of the hand-grip exercise, the blood pressure cuff on the participant’s arm

was inflated, almost instantly trapping the metabolites generated by the exercise within the forearm muscles. This allowed the metabolites to collect in the forearm tissue without being cleared by the circulatory system. There, the metabolites continued to activate fatigue pathways, sending messages of fatigue to the brain and allowing researchers to measure how much fatigue and pain may occur because of the trapped metabolites.

“This suggests that hypersensitive fatigue pathways play an important role for the often pronounced exercise-related fatigue of patients with the disease,” Staud said.

Next, Staud plans to explore treatment interventions and to conduct brain-imaging studies of patients with SEID.

“The take-home message here is, like many of the pain studies we have conducted, there are both peripheral and central nervous system factors at play in these complex syndromes,” said Robinson, who is also the director of the UF Center for Pain Research and Behavioral Health. “Our study seems to highlight the important role of these peripheral tissues.”

Science writer for UF Health. Morgan writes about the research of faculty physicians in the College of Medicine. She joined the UF Health staff in 2014. A Michigan native, she... END_OF_DOCUMENT_TOKEN_TO_BE_REPLACED