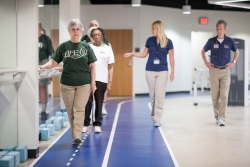 Even everyday activities such as dusting and walking to the mailbox can reduce older adults’ risk of heart attack or death, according to a University of Florida Health study released today (Feb. 18) in the Journal of the American Heart Association.

The researchers found that the amount of time participants in the study were sedentary was associated with a higher predicted risk for cardiovascular events. In fact, every 25 to 30 minutes of sedentary behavior — such as watching television, sitting to eat meals and lying down to read — translated to a 1 percent increase in the risk of a cardiovascular event.

“We know that physical activity is an important risk factor for cardiovascular health, but what we really don’t know as much about is how low levels of activity might influence health, particularly among older adults and those people who have mobility limitations,” said Thomas Buford, Ph.D. an assistant professor and director of the Health Promotion Center at the UF Institute on Aging.

The group’s 10-year predicted risk ranged from 4.2 to 21.6 percent, averaging around 13 percent. Overall, study participants spent about 77 percent of their waking hours engaged in sedentary behavior. The researchers found that every 20 minutes the participants engaged in lower-level activity was associated with a 1 percent decrease in cardiovascular risk.

“Even among people who had very low levels of activity and spent nearly 80 percent of their time completely sedentary, the amount of time each day simply engaging in some low level of activity was associated with lower predicted risk of experiencing a major cardiovascular event,” Buford said.

More than 1,100 people who participated in the Lifestyle Interventions and Independence for Elders, or LIFE, study were asked to wear accelerometers for seven days before the beginning of the study. The accelerometers measured how much the participants, ages 74 to 84, moved throughout the day. UF Health researchers then correlated activity level with their predicted risk of coronary events, including heart attack or coronary death, also known as sudden cardiac death. Their prediction was based on the Framingham risk score, an assessment that determines the 10-year risk for cardiovascular disease based on a person’s age, blood pressure, total cholesterol and other factors.

The researchers used accelerometers to measure the force a person uses to produce motion and convert those movements into electric signals, or counts. These counts are measured over a specific period of time.

Activity just slightly above sedentary — in the 100 to 499 counts-per-minute range, which could be light housework or slow walking — was associated with higher levels of the more beneficial kind of cholesterol, HDL, in people with no history of heart disease. Despite the fact that most health recommendations suggest 150 minutes per week of moderate-intensity structured exercise, these associations may show that older adults may get cardiovascular benefits even from lower-intensity activities.

“The standard recommendations on duration and intensity may not apply to many older adults with mobility limitations because they don’t have the physical capabilities to perform that kind of exercise,” Buford said.

For older adults with mobility issues it is important to remember that even physical activity that isn’t part of a formal exercise program can be beneficial, said Tony Marsh, Ph.D., co-author of the paper and a professor in the Wake Forest University department of health and exercise science.

“An older adult with functional limitations may not be able to perform moderate-to-vigorous exercise,” Marsh said. “But you can go for a walk with your spouse or your kids or your dog. The critical element is to do something that gets you off the couch and moving.”

A limitation of the study was that it examined a person’s predicted risk rather than actual risk of heart attack or coronary death. Next, Buford plans to examine the actual risk of cardiovascular events based on data collected during the LIFE study.

Science writer for UF Health. Morgan writes about the research of faculty physicians in the College of Medicine. She joined the UF Health staff in 2014. A Michigan native, she... END_OF_DOCUMENT_TOKEN_TO_BE_REPLACED