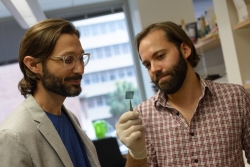 The miniaturized platform, known as a microarray, uses patients’ cancer cells to test various doses and combinations of chemotherapy drugs. The device’s breakthrough capability — its ability to work with a smaller number of cancer stem cells — is especially crucial because such cells are particularly rare. Cancer stem cells comprise about 1 percent of a typical tumor, and other drug-testing methods require larger amounts of cells.

The device was developed by Benjamin G. Keselowsky, Ph.D., an associate professor in the J. Crayton Pruitt Family Department of Biomedical Engineering and Matthew R. Carstens, Ph.D., a post-doctoral associate in Keselowsky’s laboratory. Researchers from the Cleveland Clinic and University of California collaborated on the research, which was published June 29 in the Proceedings of the National Academy of Sciences.

The microarray is a piece of square glass the size of a quarter that can hold a tiny grid of several hundred polymer “islands.”  The “islands” are first loaded with various combinations and doses of chemotherapy drugs. Cancer cells are then added, and the cells’ interaction with the drugs is observed to determine which combinations work best, Carstens said.

The new array uses less than 6 percent of the cancer stem cells that are typically needed for such testing. Extracting elusive and rare cancer stem cells from patients is time consuming and expensive, and the new technique makes the process more efficient and cost-effective, Carstens said. The process has been granted a patent, although clinical trials may likely be required before it could be put to widespread use in clinics and laboratories, according to Keselowsky.

It also represents an advance in personalized medicine: A patient’s cancer stem cells can be extracted and tested with various combinations of chemotherapy drugs. Currently, physicians try various drug combinations directly on patients — a process that the new microarray may someday replace.

“The potential for treatment is that we can do a lot of testing and know what will work in the patient. The ability to test multiple chemotherapy treatments with fewer cancer cells is a big advancement,” said Emina H. Huang, M.D., a colorectal surgeon at the Cleveland Clinic, professor of surgery at the Clinic’s Lerner College of Medicine at Case Western Reserve University and vice chair of the Clinic’s department of stem cell biology and regenerative medicine.

Some of the research was done in Huang’s lab at UF Health, where she was a colorectal surgeon and professor of surgery. She also supplied the cells for the research and taught Carstens how to culture them.

While the microarray was tested on colorectal stem cells, Keselowsky said the approach could be used to test the efficacy of chemotherapy drugs on virtually any kind of cancer that involves a solid tumor. Chemotherapy for colorectal cancer is often a combination of two drugs, and researchers tested the interaction of the drugs nutlin-3a and camptothecin on cancer stem cells. The cells were taken from a 70-year-old, stage IV cancer patient and a 60-year-old patient with stage III colorectal cancer. The microarrays were seeded with approximately 200 cells per “island” — 16 times fewer cells than other chemotherapy testing methods use.

The new array’s efficient use of rare cells means that a patient could undergo a biopsy and the cancer stem cells could be tested with combinations of chemotherapy drugs sooner. That would deliver the best treatment regimen to the patient in a timelier manner.

“Because it requires far fewer cells, there would be a quicker turnover time. That makes it possible to personalize the chemotherapy regimen much sooner,” Keselowsky said.

In addition to potentially needing clinical trials, bringing the new microarray into widespread use would likely require a company to invest in further research and possibly production, Keselowsky said. Still, the invention is a significant advance in personalized medicine for cancer patients, he said.

“It’s a combination of having a novel device that works on colon cancer stem cells, which is an important cancer biology topic right now,” he said.

Other members of the research team included Robert C. Fisher, Ph.D., a project scientist at the Cleveland Clinic; Abhinav P. Acharya, Ph.D., a post-doctoral fellow at the University of Pittsburgh; Elizabeth A. Butterworth, a technician in Huang’s UF lab; and Edward Scott, Ph.D., a professor in the department of molecular genetics and microbiology in the UF College of Medicine.

Doug Bennett joined the UF Health staff in January 2015 as a science writer and editor. His topic areas include anatomy; biochemistry and molecular biology; molecular genetics and microbiology; pathology,... END_OF_DOCUMENT_TOKEN_TO_BE_REPLACED