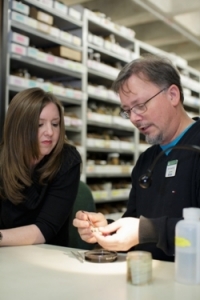 A rare parasite that can cause sickness in humans and animals is present in more species of snails in Florida than previously thought, potentially putting people and pets who eat snails at risk.

University of Florida scientists made the discovery after an orangutan treated at UF died from eating snails carrying the parasite Angiostrongylus cantonensis, known as the rat lungworm. While the rat lungworm is considered established in snail populations in Hawaii, until now it has not been commonly seen in the continental United States. However, the researchers’ findings show the parasite may now be established in South Florida, which raises concerns about how it got there and the potential implications for both animal and human health.

“Determining the geographic distribution of this parasite in Florida is important due to the hazards to human health,” said Heather Walden, Ph.D., an assistant professor of parasitology at UF’s College of Veterinary Medicineand lead author of a study published online this month in the Journal of Parasitology.

The rat lungworm is a nematode that can affect both animals and humans. It uses the rat as a definitive host and gastropods, such as snails, as intermediate hosts.

Florida’s large horticultural industry makes the parasite’s presence in the state particularly disturbing because plant nurseries are one of its most important modes of transport.

“Most of the snails found to be intermediate hosts for this parasite in our study are invasive and some feed on or shelter on ornamental plants, which have the potential for distribution throughout Florida and in other areas of the United States,” Walden said.

Walden’s research builds on a previous UF study, which reported that a 6-year-old orangutan treated at UF in 2012 after exhibiting neurological symptoms was infected with the rat lungworm. The animal had a history of eating snails, Walden said.

In 2013, Walden and a colleague visited the Miami area to collect terrestrial snails from the orangutan’s infection site. They sorted snails by size, shape and color and identified them by species.

The scientists collected mucus from all of the snails and analyzed specimens for the presence of nematodes. Additionally, rat fecal samples were collected from the original infection site and examined for nematodes.

Of five species of terrestrial snails tested, three tested positive for the rat lungworm. One species was the same as the orangutan had ingested, one is a known intermediate host and the other had never previously been identified as an intermediate host, the study states. All of the rat fecal samples contained the nematode.

Walden is working with study co-author John Slapcinsky, an invertebrate zoologist who specializes in the study of mollusks with UF’s Florida Museum of Natural History, to properly identify and process all of the snails collected in this project.

In addition to the danger to humans, the rat lungworm can also affect dogs, horses and birds.

“These species all get similar diseases,” she said. “So these findings are of interest not only to companion animal medicine but to human medicine as well.”

The parasite causes a rare and potentially fatal form of meningitis in people, according to the Centers for Disease Control and Prevention.

Walden hopes to broaden her survey to the entire state of Florida and will be working with UF veterinary students in the endeavor.

“Humans can’t become infected with this parasite unless they eat an undercooked or raw snail,” she said. “Some animal species can harbor the infective larvae, like different crustaceans or frogs. As long as food is cooked and you wash your produce, you will most likely never ingest it.”

As for pet owners, “I often tell my students, ‘Don’t let your pets eat lizards or catch mice,’ to avoid potential infection of other parasites. Snails also fall into that group,” Walden said. “If you know you have a snail problem, try to keep your pet away from that area.”

Sarah Carey, M.A., A.P.R., is director of public relations at the University of Florida College of Veterinary Medicine, a job she has held since 1990. Formerly, she was editor of... END_OF_DOCUMENT_TOKEN_TO_BE_REPLACED