UF Health to resume elective surgeries, procedures on Monday, May 4. For more information on our ongoing response to COVID-19 in Gainesville, Jacksonville and Central Florida, visit our coronavirus website. END_OF_DOCUMENT_TOKEN_TO_BE_REPLACED

Published: May 26, 2015 By: Sarah Carey Category: University of Florida, College of Veterinary Medicine 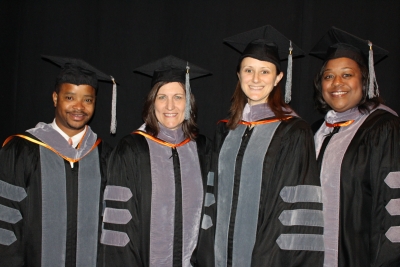 The program was established in 2000 to recognize outstanding alumni, faculty and friends of the college in the categories of Alumni Achievement, Distinguished Service, Special Service and Outstanding Young Alumni.

Isaza also administers a donor-funded program known as Helping Alachua’s Animals Receive Treatment and Surgery, which helps cover the cost of treating shelter animals for medical issues beyond basic spay and neuter. She is a co-founder of the St. Francis House Pet Care Clinic in Gainesville.

Commander Lauren Davidson, D.V.M., a 1999 UF veterinary medical college alumna, received the Distinguished Service Award. A commissioned officer in the United States Public Health Service, Davidson also is board-certified in laboratory animal medicine. She serves as director of veterinary resources for the National Institute of Dental and Craniofacial Research at the National Institutes of Health.

Davidson is the youngest person to become animal program director and only the second black woman in NIH history to hold that position. Davidson has participated in many U.S. Public Health Service readiness responses and support activities. She received the agency’s Commendation Medal and the U.S. Coast Guard Achievement Medal. She also serves on various committees and boards to address issues among female USPHS officers, including leadership and work-life balance. In addition, she mentors students in the Washington, D.C. area who are interested in veterinary medicine, science and technology.

Pamela Ginn, D.V.M., received the Special Service Award. Ginn received her D.V.M. degree from Colorado State University in 1983 and worked in small-animal private practice until 1990. She joined UF’s faculty in 1992 after completing a residency in anatomical pathology and singlehandedly developed UF’s dermatopathology service. She is board-certified in veterinary pathology and internationally recognized for her expertise in skin-related diseases.

Ginn has received many awards for her teaching, including the American College of Veterinary Dermatologists’ Excellence in Teaching Award in 2011. She was named associate dean for students and instruction at the UF veterinary medical college in 2012 and has played a key leadership role in curricular revision and documentation, student wellness and establishment of student learning outcomes.

Wright, who earned his undergraduate degree from Florida A&M University in 2002, was recruited back to FAMU for the job he now holds as director of veterinary technology program. Prior to that, he worked for several private small-animal veterinary practices in the southeastern United States.

He helped guide the FAMU program through accreditation by the American Veterinary Medical Association and serves on the UF veterinary college admissions committee.

Her research focuses on salmonella pathogenesis, including identification of novel pathways used by the bacterium to grow in the gut. Thus far, she has published 11 refereed manuscripts, generated 23 abstracts and received an NIH-mentored clinical scientist research career development award, among other accomplishments.

The awards were presented May 23 at the Phillips Center for the Performing Arts during college commencement exercises.

Sarah Carey, M.A., A.P.R., is director of public relations at the University of Florida College of Veterinary Medicine, a job she has held since 1990. Formerly, she was editor of... END_OF_DOCUMENT_TOKEN_TO_BE_REPLACED