UF Health to resume elective surgeries, procedures on Monday, May 4. For more information on our ongoing response to COVID-19 in Gainesville, Jacksonville and Central Florida, visit our coronavirus website. END_OF_DOCUMENT_TOKEN_TO_BE_REPLACED

Tweet
Geoffrey Zann, a third-year student at the University of Florida College of Veterinary Medicine, has received the highly competitive national 2015 Merial Veterinary Research Scholar Award for his research on the motion of the kneecap after surgery in dogs. 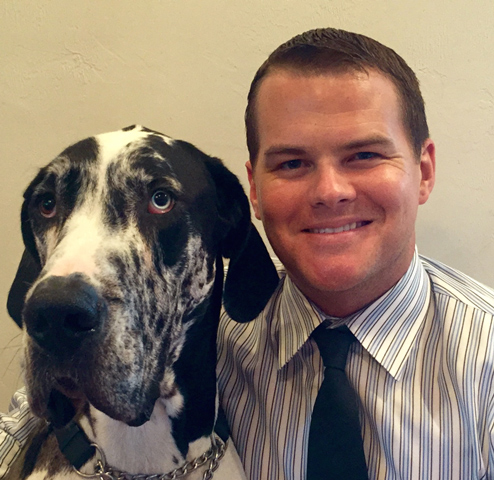 The award consists of $1,500, a plaque and a stipend to attend the upcoming Merial-National Institutes of Health National Veterinary Scholars Symposium, where Zann will present his research. The symposium will be held July 30 to Aug. 2 at the University of California-Davis.

“The quality of Geof’s application, strength of his letters of recommendation and the diversity of his research work contributed to his selection as this year’s winner,” said Monica Figueiredo, a program director with Merial’s Research and Development External Innovation Office.

The award is open to all veterinary medical summer scholars who participated in the program, attended the group’s annual symposium, presented their work in the form of a poster and completed their proposed project work plan by Sept. 30 of that year. About 20 applications for the award are received each year from the 30 colleges of veterinary medicine in the United States, Figueiredo said.

Zann's research involved the study of patellar kinematics, or motion of the knee cap, in dogs with rupture of the cranial cruciate ligament, the canine equivalent of the anterior cruciate ligament in humans.

The prevailing method of correcting this condition surgically in dogs is a through a procedure known as tibial plateau leveling osteotomy, or TPLO, in which the knee joint is stabilized. Although this surgery succeeds in restoring joint stability at the knee, it is not without drawbacks, Zann said.

“Our research aimed to characterize the movement of the patella in dogs treated by TPLO and to compare this movement to joints with normal knees,” he said. “By doing this, we were able to determine the effect of surgery on patellar motion.”

Zann’s mentor, Stanley Kim, BV.Sc., an assistant professor of small animal surgery at the college, said the research findings may aid development of strategies to prevent problems of the patella and patellar tendon that are frequently observed following surgery.

A 2007 graduate of Yale University, Zann is also a lieutenant in the U.S. Naval Reserves. He served on active duty between 2007-2012 and is the recipient of the Navy Commendation Medal, two Navy Achievement Medals, and the Combat Action Ribbon.

Although the Merial program typically involves 10 weeks of summer research, Zann’s study expanded soon after his initial data collection showed that the project, first proposed by Kim, could have broader implications for the veterinary surgical community.

“Geof worked exceptionally hard and has been very productive,” Kim said. “He will have presented at two national surgery meetings by the end of the year and we are planning to submit two manuscripts for peer-reviewed publication within the next 12 months.”

Since 1989, Merial has funded research programs at veterinary medical schools to provide students with an opportunity to experience biomedical research first-hand. Currently all veterinary schools in the United States, Canada, France and The Netherlands participate.

Sarah Carey, M.A., A.P.R., is director of public relations at the University of Florida College of Veterinary Medicine, a job she has held since 1990. Formerly, she was editor of... END_OF_DOCUMENT_TOKEN_TO_BE_REPLACED