UF Health to resume elective surgeries, procedures on Monday, May 4. For more information on our ongoing response to COVID-19 in Gainesville, Jacksonville and Central Florida, visit our coronavirus website. END_OF_DOCUMENT_TOKEN_TO_BE_REPLACED

Year-round baseball in the South could lead to more injuries, according to UF Health research 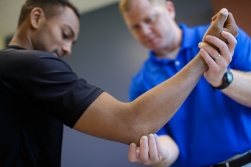 Baseball pitchers are prone to elbow injuries, but pitchers who live or play in the South are at even more risk, a new University of Florida Health study finds.

Blame the weather. The warmer climate that draw tourists and retirees also allows for year-round ball, which can lead to throwing-arm overuse.

The paper, which will be presented at the annual meeting of the American Medical Society for Sports Medicine in April,  shows that college baseball pitchers are at a 5.5 percent higher risk for tearing a ligament in their elbow, an injury that primarily plagues pitchers, if they currently play in the South. Additionally, pitchers who pitched high school baseball in southern states are 6.2 percent more likely to tear the ligament compared to pitchers who pitched high school baseball in northern states.

UF Health researchers hope their study will help inform coaches and parents of young baseball players who are beginning their careers, so that they will understand the risks of overuse.

Tearing of the ulnar collateral ligament, a ligament that wraps from the upper arm bone to the ulnar in the forearm, often leads to a surgery called the Tommy John surgery. The procedure, named after a major league pitcher who had the surgery in 1974, has been performed more frequently in recent years. A position statement published on the American Sports Medicine Institute website says the conditions that lead to the surgery, which include pitching while fatigued or in pain, pitching year-round and pitching on multiple teams, are at an epidemic level. 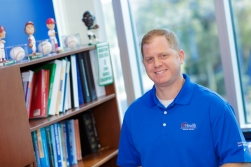 “The old adage isn’t necessarily correct: that more is better. The more is leading to overuse injuries,” said Jason Zaremski, M.D., an assistant professor of orthopaedics and rehabilitation in the UF College of Medicine and co-medical director of the department’s high school outreach program. “While a Tommy John injury is an acute injury, the tear happens because of years of overuse.”

Zaremski, lead author of the paper,, said if a major league player experiences the tear, his symptoms may have begun in high school or earlier. Researchers think athletes’ increasing focus on a single sport at younger ages leads them to overuse particular parts of their body — in this case, their elbows.

“The spike we’ve seen over the last ten years closely correlates to the beginning of baseball showcases, year-round baseball travel teams and playing on multiple teams,” said. Kevin Farmer, M.D., team physician for the UF Athletic Association, assistant professor in the department of orthopaedics and rehabilitation, and senior author of the study.

To establish the association between increased risk to pitchers in the South compared with pitchers in the North, the researchers first established what they considered warm weather states —those with a yearly temperature average of 55 degrees or more. Southern states included Alabama, Arizona, Arkansas, California, Delaware, Florida, Georgia, Hawaii, Kentucky, Louisiana, Mississippi, New Mexico, North Carolina, Oklahoma, South Carolina, Tennessee, Texas and Virginia. They then looked at baseball media guides, which provide information about each player on the team, for each school in the Big Ten Conference and for each school in the Southeastern Conference and searched them for terms such as Tommy John surgery and elbow injury. The researchers also combed the Internet using search engines and cross-referenced the injuries they found in the media guides with articles found online.

“We’re aware there are some limitations to this method and some injuries might be missing, but given we did the search the same way for each school, we think the risk of missing a few of those injuries is minimal,” Zaremski said. “Often, parents and coaches are only focusing on the injury at the collegiate level and that’s too late,” said MaryBeth Horodyski, Ed.D., a professor and director of research in the department of orthopaedics and rehabilitation and second author of the paper. “You don’t drop your kid off at the swimming pool without a lifeguard there. When you drop off your kid at other sports, who’s making sure their injuries are being taken care of properly?”

Horodyski recommends that even high school teams have a licensed athletic trainer at their practices and that their coaches are properly trained to recognize practice habits that lead to overuse injuries.

“This is an injury that should not be happening at our high school level or even collegiate level,” Zaremski said. “This is a preventable injury. If we can get to these baseball players and pitchers at a younger age and educate them on the risk of playing through pain if it’s their throwing elbow or shoulder, I suspect we can decrease the amount of these injuries.”

Science writer for UF Health. Morgan writes about the research of faculty physicians in the College of Medicine. She joined the UF Health staff in 2014. A Michigan native, she... END_OF_DOCUMENT_TOKEN_TO_BE_REPLACED