UF Health to resume elective surgeries, procedures on Monday, May 4. For more information on our ongoing response to COVID-19 in Gainesville, Jacksonville and Central Florida, visit our coronavirus website. END_OF_DOCUMENT_TOKEN_TO_BE_REPLACED

After going missing five years ago, cat reunited with owners through microchip 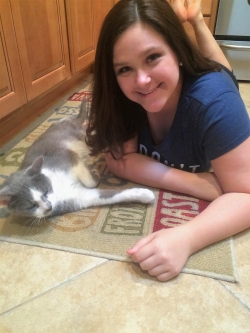 University of Florida shelter veterinarian Kelly Harrison has made hundreds of calls to phone numbers registered to microchips discovered in homeless animals over the years.

Overwhelmingly, those calls resulted in dead ends — outdated contact information, a disconnected phone, even in some cases people uninterested in claiming the animal.

But the results from a call she made back in June to a Tampa number about an older cat seen at the Levy County Animal Shelter were completely unexpected.

“This case started out no different than the typical microchip follow-up call,” said Harrison, a clinical instructor with UF’s Veterinary Community Outreach program. The program, based at UF, takes veterinary medical students on regular field visits to local animal shelters as a part of their VCOP rotation.

On the day she made the call, Harrison was supervising a group of veterinary students performing their rotation at the Levy County animal shelter. An elderly gray and white cat caught her eye while the students were working, and Harrison says she still isn’t exactly sure why the cat attracted her attention, or somehow hadn’t previously been scanned for a chip.

She just knew there was something about that cat.

“The first number I called was the chip company, which was my normal process,” Harrison said. “But the company had three numbers listed, which was interesting; someone had gone the extra mile to put in three numbers.”

No luck ensued with the first two numbers, but just after the third went to voicemail and Harrison began leaving a message, Tampa resident John Bogush picked up.

“He said, ‘Well, we’re missing a gray and white cat from five-plus years ago, and I’m almost positive my wife will want it back,’” Harrison said.

Bogush, his wife, Jennifer and their daughter, Sophia, drove up to Levy County the next day to retrieve their cat, Sparky, who is about 9 years old now.

“When Dr.  Harrison asked if we’d be interested in picking Sparky up, I said, ‘can we come tomorrow’ and she paused,” Bogush said. “Then she said, ‘Oh my, I’m so glad to hear that.’ I could tell it affected her.”

Just over a month after Sparky was reunited with his family, Bogush said the whole experience has been a bit surreal and has taken some time to sink in.

“We were quite flabbergasted,” he said. “Not only did we find out Sparky was still alive, we were able to get him back into our household.”

During all of the years of his absence, the family believed that Sparky, who had been an indoor-outdoor cat in an area where neighbors’ pets had disappeared and where there was a known bobcat population, had probably succumbed to a tangle with a wild animal.

“I’d never seen him run from a threat,” Bogush said.

Although Sparky was always very independent, he was also “incredibly affectionate,” Bogush said. The morning he didn’t come home, the family was very disappointed.

“We kind of asked for it, letting him be outside that much, but now he’s completely an inside cat,” Bogush said, adding that  Sparky is adjusting well to being indoors all the time and to the other animals in the household, including another cat and a golden retriever.

Aside from being ravenously hungry the first couple of weeks back home, Sparky acts now as if he never left.

“When we brought him home, the dog we’d had at the time he went missing immediately ran up to him,” Bogush said. “They touched noses and Sparky weaved between his legs and walked straight to the water bowl to get a drink. That was the first thing we witnessed, that he really remembered where the food and water bowls were.”

Sparky has gained weight and is overall doing very well.

“Not only was he truly loved when we had him originally, but he also was a responsibility we took on when we got him and he’s still our responsibility,” Bogush said.

The happy ending in Sparky’s case is a reminder of the importance of not just microchipping pets, but also of keeping contact information registered with microchip companies up to date, said UF’s Harrison. A change of address, email or phone number means it’s time to make an update through the microchip manufacturer.

Whenever a pet receives a microchip, the chip manufacturer provides an activation card with an ID number and a phone number to call. That’s the same number to call to make updates.

Microchip information can also be updated online on most manufacturer websites or on larger registry databases such as http://www.foundanimals.org/microchip-register. Another good resource for looking up chip information is http://www.petmicrochiplookup.org​.

Sarah Carey, M.A., A.P.R., is director of public relations at the University of Florida College of Veterinary Medicine, a job she has held since 1990. Formerly, she was editor of... END_OF_DOCUMENT_TOKEN_TO_BE_REPLACED