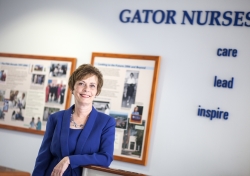 McDaniel is the fifth dean of the College of Nursing and joined UF in 2013. In addition to serving as dean, she is assistant vice president for academic-practice partnerships at UF Health. McDaniel’s research focuses on using technology for cancer prevention and control, specifically the treatment of nicotine dependence. Her creative approach to research has earned her consistent research funding and international recognition.

“On behalf of UF Health, I am so proud that Dean Anna McDaniel has received this honor, which is befitting of such an outstanding academic leader and researcher. In her short time here, Dean McDaniel has already made a great impact on both the College of Nursing and UF Health,” said David S. Guzick, M.D., Ph.D., UF senior vice president for health affairs and president of UF Health. “She has substantially grown the research portfolio of the college and filled four endowed professor positions. Dean McDaniel has strengthened the collaboration between her college and the UF Health division of nursing, and she has expanded the baccalaureate program and streamlined the Doctor of Nursing Practice curriculum.

“We are grateful for the generosity and support of Dr. Linda Aiken, an esteemed and proud alumna of UF who has accomplished so much in her career to improve health care quality and safety,” Guzick said.

McDaniel serves as the chair of the Florida Association of Colleges of Nursing, as a reviewer for professional journals and scientific meetings, and as an ad hoc member of National Institutes of Health review panels in her areas of research expertise. She is also a co-leader of the steering committee of the Florida Action Coalition.

Prior to coming to UF, she served as the associate dean for research at the Indiana University School of Nursing. McDaniel has contributed to more than 120 scientific publications and presentations, and she has served as a principal investigator or co-investigator for more than $34 million in research grants and contracts.

“I am incredibly honored to be named the Linda Harman Aiken Professor, named for a most distinguished alumna of our university and known as a respected nursing researcher internationally,” McDaniel said. “I can only hope to live up to Dr. Aiken’s contributions to both health care and our College of Nursing. I am grateful and humbled by this distinction.” 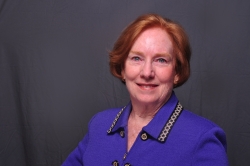 Aiken is the director of the Center for Health Outcomes and Policy Research, the Claire M. Fagin Leadership Professor of Nursing and a professor of sociology at the University of Pennsylvania. She conducts research on the health care workforce and the quality of health care in the U.S. and globally, and is the author of more than 300 scientific papers.

Aiken has directed studies of the impact of nursing on patient outcomes in more than 30 countries. Her research has influenced public policy and managerial decision-making. Aiken received her bachelor’s and master’s degrees in nursing from UF. She credits her education at UF for helping launch her successful career in nursing and policy research.

Aiken said she believes that McDaniel has been the best possible leader and role model for the College of Nursing’s continued growth in national prominence.

“Dean McDaniel has substantially transformed the UF College of Nursing’s research in keeping with UF’s goal of being a top-ranked institution. She is committed to continuing to strengthen the outstanding educational programs and clinical service. It is wonderful to have a prominent nurse researcher leading the college at this important time. I am very pleased to have our names associated through the professorship,” Aiken said.

Tracy Wright was director of public relations and strategic communications for the University of Florida College of Nursing. She holds a master's degree in mass communications with a concentration in... END_OF_DOCUMENT_TOKEN_TO_BE_REPLACED