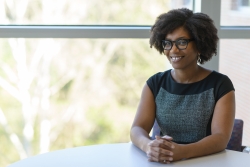 Call it personalized medicine for depression — but the prescription in this case is exercise, which University of Florida Health researchers have found helps people with certain genetic traits.

A UF study has found that specific genetic markers that put people at risk for depression also predict who might benefit from exercise, according to a study published recently in The Journal of Frailty & Aging. The researchers found that men who were carriers of two specific genes had the most significant response to exercise. The results suggest physical activity as part of a treatment plan — exercise as moderate as walking — could help the carriers of these genes.

“I want to better understand who could benefit most from physical activity. I’d like to take the same approach to exercise that we take to medication, which is to have a personalized medicine approach,” said Vonetta Dotson, Ph.D., the study’s first author and an assistant professor in the College of Public Health and Health Profession’s department of clinical and health psychology. “If we show through systematic research that exercise has a good chance of helping a patient because of their particular characteristics, I think that might help with patients’ motivation to exercise.”

The results came from a small pilot study, so more research needs to be done before this work can be translated into clinical practice. But in the future, it’s possible that blood or saliva could be tested to determine if a person could benefit from physical activity to lower depressive symptoms.

The study used data gathered in the Lifestyle Interventions and Independence for Elders, or LIFE, pilot study. During the LIFE pilot study, 396 sedentary older adults were separated into two groups: those who received health education classes and those who were given moderate physical activity classes for 12 months.

A subsequent paper published from the LIFE pilot study found that exercise did not significantly affect depression symptoms across the whole group, but that changed when the research team tunneled down into the data.

“When we looked at subgroups, we ended up finding significant response to exercise in men who were carriers of a specific gene.” Dotson said.

To assess the participants’ response to exercise, they took a test called the Center for Epidemiologic Studies Depression Scale, a screening test for depression and depressive disorders, at the beginning of the LIFE study’s intervention. They took the test again after the interventions ended, at 12 months. The scale assesses four factors, including symptoms of sadness and fearfulness, symptoms such as loss of appetite and concentration difficulties, and a diminished capacity to experience pleasure or perceived difficulties in social relationships.

The participants also underwent genetic testing before the intervention, and the researchers tested three genes: the brain-derived neurotrophic, or BDNF, gene, a serotonin transporter gene and a gene called apolipoprotein E. The researchers found the greatest decrease in symptoms such as loss of appetite and concentration difficulties in men who carried the BDNF genetic variation that predisposed them to depression. They also saw an increase in the capacity to experience pleasure in men who exercised regularly who carried specific variations of the serotonin transporter gene.

Co-author Taimour Langaee, Ph.D., MSPH, a research associate professor in the UF College of Pharmacy’s department of pharmacotherapy and translational research and Center for Pharmacogenomics, is interested in research studies on the effect of antipsychotic drugs on depression. When patients are treated with antidepressants, the level of BDNF expression normalizes, helping them overcome depression, Langaee said. This study was different because it was designed to investigate the effect of physical activity in relation to genetic variations in these genes on changes in depressive symptoms.

Langaee said the study’s results were significant, but a larger sample size and more genetic testing is needed to better determine the effect of physical activity on these genes.

Dotson said the study provides evidence that physical activity could be explored as an intervention for depression, but warns that this study was not done in people whose symptoms were severe enough to be formally diagnosed with clinical depression. She said it’s also important to understand the benefits of exercise because of the impact medications may have on the brains of older adults.

Science writer for UF Health. Morgan writes about the research of faculty physicians in the College of Medicine. She joined the UF Health staff in 2014. A Michigan native, she... END_OF_DOCUMENT_TOKEN_TO_BE_REPLACED