UF Health to resume elective surgeries, procedures on Monday, May 4. For more information on our ongoing response to COVID-19 in Gainesville, Jacksonville and Central Florida, visit our coronavirus website. END_OF_DOCUMENT_TOKEN_TO_BE_REPLACED

Shifting the potential for cognitive aging 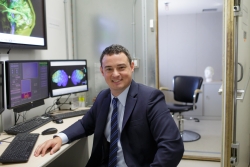 University of Florida aging researcher Adam Woods, Ph.D., has been awarded a five-year, $6 million grant from the National Institute on Aging to investigate a method of improving cognitive training in older adults. Woods is assistant director of the Center for Cognitive Aging and Memory Clinical Translational Research Program within the UF Institute on Aging and Evelyn F. and William L. McKnight Brain Institute at the University of Florida. Woods shares more about his research here:

Q: What is normal cognitive aging?

A: As we get older, our thinking and memory skills tend to decline. This might affect our ability to be a good driver, manage our bank account or take medications on the correct schedule. This change, which is very common and even normal with aging, has a significant impact on our ability to maintain independence and quality of life. This decline can also be the first signs of potentially sharper declines in cognitive ability that may indicate mild cognitive impairment or Alzheimer’s disease.

A: Transcranial direct current stimulation, or tDCS, is a form of noninvasive brain stimulation which has been performed safely in more than 3,000 people in more than 30,000 sessions — a topic I recently researched. tDCS involves placing a pair of electrodes on the scalp, and then passing a weak electrical current — about 2 milliamps — through the scalp. It generates a tingling or prickling sensation on the scalp, but this electrical stimulation is able to safely penetrate the head and stimulate underlying brain tissue.

Q: What is cognitive training?

Q: How does tDCS stimulation affect normal cognitive aging?A: The point of this stimulation is that it is able to facilitate the brain’s ability to form new connections, a process known as neuroplasticity. You can think of this as learning at the neuronal level. In this case, we’re not causing the neurons to fire. Instead, using a very specific set of stimulation parameters, we very subtly are preparing neurons to be more ready to fire, which allows the brain to learn more quickly and for the learning effects to sink in more deeply.

Q: How is the trial designed?

Q: What is the goal of this trial?

A: Our idea is that if you can slow or reverse this process of normal cognitive aging, you may be able to at least postpone, if not prevent, the onset of dementia later in life. In addition, we have the potential to slow or prevent the loss of independence and functional abilities important for everyday life that occurs later in life, even in the absence of dementia. We are looking to see if we can take those who are healthy and push this decline back. Our goal with this trial is to use something that’s known to be effective — cognitive training — and then enhance that effect using noninvasive brain stimulation.

Science writer for UF Health. Morgan writes about the research of faculty physicians in the College of Medicine. She joined the UF Health staff in 2014. A Michigan native, she... END_OF_DOCUMENT_TOKEN_TO_BE_REPLACED