UF Health to resume elective surgeries, procedures on Monday, May 4. For more information on our ongoing response to COVID-19 in Gainesville, Jacksonville and Central Florida, visit our coronavirus website. END_OF_DOCUMENT_TOKEN_TO_BE_REPLACED

Tweet
Mandy Wallace, D.V.M., a small animal surgery resident at the University of Florida College of Veterinary Medicine, was 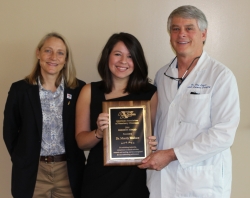 recently honored by a national professional association for her achievements in the clinical, educational and scholarly arenas.

In April, the American Association of Veterinary Clinicians, an organization of veterinary clinicians engaged in teaching and research at the professional, graduate or postgraduate level, presented Wallace with its Resident Award, which is given annually to two residents selected from all the veterinary residents in North America.

She has received three successful grant proposals, and was one of only two residents selected nationwide to receive the American College of Veterinary Surgeons’ annual surgeon-in-training grant. The grants support her primary research interest, which involves the exploration of a new device for the closure of portosystemic shunts in small animals.

Also known as liver shunts, portosystemic shunts are a serious medical condition through which the body’s circulatory system bypasses the liver, causing blood from the abdominal organs to be shunted to the systemic circulation. The condition can be present at birth or acquired, and affects primarily small breed dogs.

“Currently, 24 American Kennel Club breed clubs list portosystemic shunts as a disease of concern in their breed,” Wallace said. “Of these 24 breeds, four, including Yorkshire terriers, miniature schnauzer and the Shetland sheepdog, are on the 2016 AKC’s most popular dog breeds list.”

The method Wallace has explored provides reliable closure of the shunt over four to six weeks without the inflammation frequently associated with the traditional device.

In addition, in 2014 the American Bouvier Rescue League named Wallace its “Veterinarian of the Year” for her efforts to save the leg of a dog named Amitz.

Wallace completed her D.V.M. degree from Mississippi State University in 2010. She then entered the joint small animal surgery residency-master’s degree program at the UF veterinary medical college. She completed her master’s degree in veterinary medical sciences in 2015 under the supervision of Gary Ellison, D.V.M., and will finish her residency in July. She served as chief resident for the UF Veterinary Hospitals in her final year. This fall, Wallace will join the small animal surgery faculty at the University of Georgia College of Veterinary Medicine.

Sarah Carey, M.A., A.P.R., is director of public relations at the University of Florida College of Veterinary Medicine, a job she has held since 1990. Formerly, she was editor of... END_OF_DOCUMENT_TOKEN_TO_BE_REPLACED