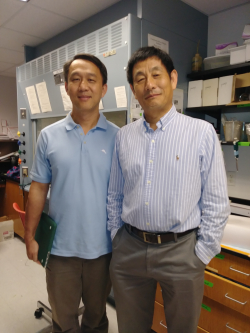 A protein produced by the liver significantly reduces the chronic, low-grade inflammation that may contribute to aging and aging-related diseases, a group of University of Florida Health researchers has found.

Using human cell and fruit fly models, the researchers showed the protein, known as human alpha-1 antitrypsin, has anti-inflammatory and cell-protecting properties. That makes the protein particularly effective at stopping so-called “inflammaging,” chronic inflammation that has been implicated in a host of aging-related disorders such as cardiovascular disease, Type 2 diabetes and osteoporosis. The findings by 13 scientists in the UF department of molecular genetics, the College of Pharmacy, the UF Genetics Institute and the UF Health Cancer Center were published in the journal Aging Cell.

While much research remains to be done, understanding how the protein works to suppress the genes that promote inflammation is a crucial step, said Sihong Song, an associate professor of pharmaceutics in the UF College of Pharmacy, part of UF Health.

“Although this protein may contribute to extending the lifespan of humans, we’re more interested in improving quality of life for the elderly,” Song said.

Inflammation is an obvious but challenging target for preventing aging-related diseases, Song said. In both fruit flies and human cells, the protein was shown to significantly inhibit inflammation-related genes and molecular pathways, the researchers found.

The protein is appealing as a potential treatment because it is naturally produced and can be harvested from blood plasma, Song said. It already has federal approval to treat a genetic disorder known as alpha-1 antitrypsin deficiency, which can cause lung disorders such as emphysema and chronic obstructive pulmonary disease.

Fruit flies that had the human protein-producing gene inserted lived significantly longer and survived in greater numbers than those that were untreated, the researchers found. For two lines of protein-treated flies, the median ages were 51 and 57 days compared with 39 and 42 days for untreated flies.

The flies’ longevity was especially surprising to researchers, said Lei Zhou, Ph.D., an associate professor in the UF College of Medicine’s department of molecular genetics and microbiology.

More than 50 percent of the transgenic flies that were given the medication RU486 to induce expression of the human protein-producing gene survived at least 100 days. The fly’s normal lifespan is 40 to 60 days, Song noted.

During testing on human connective tissue cells, the researchers studied the protein’s effectiveness at inhibiting gene activity in cells that are no longer capable of dividing — essentially a laboratory model of what happens during inflammaging. They found that the activity of 42 genes was significantly affected by the introduction of the protein when compared with a control group.

Taken together, the findings clearly show for the first time that a human protein treatment inhibits gene activity in the molecular pathways that lead to inflammaging in human cells and fruit flies, the researchers said.

While the researchers say they don’t fully understand the molecular mechanisms of anti-inflammaging, some of the data suggest the human protein has an effect on the NF-kappaB protein, which controls certain DNA activity.

One limitation for any potential human therapy involves a supply issue: For the protein to be effective against inflammaging, the proper dose has to be delivered at the right time and place. However, the supply of protein is potentially limited because it is harvested from blood plasma. To address that, Song said he sees potential in a gene therapy technique known as AAV, which uses a small, harmless virus to deliver new genes to a patient’s cells. That targeted technique would require less of the protein and provide longer-lasting treatment, he said.

Considering its status as a Food and Drug Administration-approved therapy and its newly discovered anti-inflammaging properties, researchers said the protein is a promising candidate to fight aging and aging-related diseases.

"We found an interesting way to potentially improve the lives of older people,” Song said.

A group of UF undergraduates and postdoctoral associates also made significant contributions to the research, Zhou said. Then-undergraduate Denis Titov made the initial finding in 2013 that the protein extended the fruit fly’s life. In 2014, a group of undergraduate students worked on repeating and expanding the aging experiments. That same year, Ye Yuan, a Ph.D. student, joined the team and led the work on human fibroblast cells.

Funding for the research was provided by a National Institutes of Health grant.

Doug Bennett joined the UF Health staff in January 2015 as a science writer and editor. His topic areas include anatomy; biochemistry and molecular biology; molecular genetics and microbiology; pathology,... END_OF_DOCUMENT_TOKEN_TO_BE_REPLACED