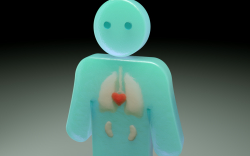 Elderly patients are vulnerable to poor long-term outcomes following a diagnosis of severe sepsis or septic shock, notes a University of Florida research team. Specifically, these patients can progress to a condition marked by chronic inflammation and muscle wasting, known as persistent inflammation, immunosuppression and catabolism syndrome, or PICS.

“We are hopeful that our work at the UF Sepsis and Critical Illness Research Center can lead to ways to predict and prevent PICS after sepsis,” said lead researcher Scott Brakenridge, M.D., an assistant professor in the UF College of Medicine’s division of acute care surgery, part of UF Health. He and his colleagues presented their results this month at the American Association for the Surgery of Trauma annual meeting and Clinical Congress of Acute Care Surgery.

The UF team studied 173 patients admitted to the surgical intensive care units at UF Health Shands Hospital between 2012 and 2016. Patients were separated into two groups — “young,” or under age 55, and “aged,” those who were 55 years or older.

Among the younger cohort, patients either recovered rapidly from sepsis or were discharged to home, with or without home health care, or to a rehabilitation facility. In contrast, aged patients were more likely to be discharged to a long-term acute care hospital, skilled nursing facility or another acute care hospital — and they were also significantly more likely to die from sepsis and its related complications than their younger counterparts.

The team found that nearly 16 percent of aged patients admitted to the surgical ICU died in the hospital, compared with 2 percent of the younger group. They also noted a high rate of death after hospital discharge in the older cohort — up to a threefold increase at six months.

Sepsis is an illness or complication in which the body has a severe, overwhelming response to infection. That response can induce tissue damage, organ failure and death. What differentiates sepsis from infection is the body’s overall response to an infectious virus, bacteria, fungus or parasite.

Researchers at UF’s Sepsis and Critical Illness Research Center are working on several projects to better predict, treat and prevent this life-threatening disease. Among the most recent efforts is a clinical trial evaluating the use of an anti-cancer drug to treat severe sepsis and septic shock.

Sepsis is thought to blunt the immune system in ways similar to some kinds of cancer through PD-1, a protein emitted by certain cells in the body. Nivolumab, an immunotherapy drug approved by the Food and Drug Administration to treat patients with certain types of non-small cell lung cancer and other types of the disease, blocks PD-1 in cancer patients and helps the immune system recognize and destroy diseased tissue, Brakenridge said.

The clinical trial seeks to determine whether blocking PD-1 can also boost the immune system in patients with severe sepsis or septic shock. UF the only center in Florida, and among four in the Southeast, currently recruiting participants.

Sepsis is the most expensive condition treated in U.S. hospitals, with annual costs exceeding $20 billion, according to the Agency for Healthcare Research and Quality.

Karin Lillis joined the UF Health staff in December 2015 as a science writer and covers the department of surgery in the UF College of Medicine. She has more than 20... END_OF_DOCUMENT_TOKEN_TO_BE_REPLACED