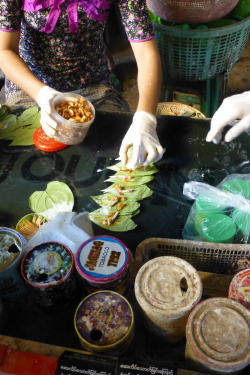 Their nascent idea: Combine nicotine gum with an existing medication used to treat dry mouth. The nicotine gum was an obvious choice because the areca nut’s active ingredient, arecoline, acts on the same receptor proteins in the brain as nicotine, said Roger Papke, Ph.D., a UF College of Medicine pharmacology professor.

But nicotine gum alone probably wouldn’t catch on as a betel quid substitute because chewing the quid is a multisensory experience, Papke said. Users who chew it for the euphoria and alertness also get accustomed to its other effects, particularly the intense salivation caused by the lime.

While talking with a collaborator, Papke hit on an idea: Add a drug to the nicotine gum to produce the salivation that betel quid users enjoy. The drug, pilocarpine, is already being used to improve salivary function in people with dry mouth.

Nicotine in the gum replaces the cravings for tobacco while the pilocarpine recreates the betel quid’s salivation experience, Papke said. That could help betel quid users dodge the threat of cancer and oral submucous fibrosis, which turns mouth tissues hard and leathery. As the fibrosis progresses, the jaw becomes rigid and patients are unable to open their mouths.

“This deals with the nicotine dependence but also gives them the chewing experience they crave without consuming the caustic lime that is found in betel quid,” Papke said.

Betel nut is widely regarded as the world’s fourth most-used stimulant after caffeine, alcohol and tobacco.

Papke is working with a Singapore-based company to get grants and in-kind support to bring the gum, known as Quid X, to the estimated 22 million betel quid users in Myanmar and hundreds of millions of others in India and southeast Asia.

While Quid X development is in its early stages, Papke said it could be brought to users much sooner than if it contained a brand-new drug. A U.S. patent application is pending and some product trials will likely need to be done overseas, Papke said.

Indraneel Bhattacharyya, D.D.S., an oral pathology researcher in the UF College of Dentistry, is collaborating with Papke on the betel nut cessation work. He is advising Papke on scientific issues and developing surveys for U.S. cities with large populations of people from India and South Asia to gauge interest in a betel nut cessation product.

As a native of India and a dental researcher, Bhattacharyya has a unique perspective on betel quid use.

“It’s culturally embedded in a large part of the world, but I also understand its biology,” he said.

Bhattacharyya recently did oral screenings at an Atlanta convention that drew many people of Indian descent. He found several people who were vulnerable to oral submucous fibrosis.

“I had a frank talk with them. I told them they had a choice: Either get cancer down the road or quit chewing betel nut now,” he said

The development of a betel nut cessation product builds on Papke’s 2015 findings, which showed nicotine dependence and betel nut addiction have a common site of action in the brain. His initial idea to study the activity of the betel nut and its active ingredient started with writing rather than science. Papke, who has authored books about the history of firearms development and the edged weapons of different cultures, was studying a Bornean headhunter’s sword. He wondered whether its psychedelic carvings were influenced by betel nut use.

The nicotine and pilocarpine gum is a potential way to break the addiction to tobacco-laden betel quid for many millions of people, Papke said.

“The idea is to use nicotine replacement therapies the same way they do for smokers. The obvious choice is to use a gum because betel nut users are already used to chewing something,” he said.

Doug Bennett joined the UF Health staff in January 2015 as a science writer and editor. His topic areas include anatomy; biochemistry and molecular biology; molecular genetics and microbiology; pathology,... END_OF_DOCUMENT_TOKEN_TO_BE_REPLACED