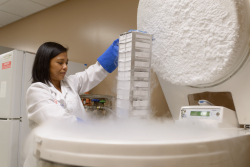 University of Florida Health brain cancer researchers have discovered a new use of stem cells that could clear a revolutionary pathway to making immunotherapy drugs effective in treating brain cancer.

“This is truly one of the more exciting developments I’ve seen in our field in many years,” said Duane Mitchell, M.D., Ph.D., co-director of the Preston A. Wells Jr. Center for Brain Tumor Therapy at the University of Florida. “This discovery gives us profound insights into the mechanisms of resistance to immunotherapy drugs, and it may offer a roadmap to use immunotherapy to effectively treat many forms of cancer.”

The findings have been published today in the journal Nature Communications.

Some tumors are able to send signals that prevent immune cells from recognizing and attacking the tumor. A new class of immunotherapy drug, called immune checkpoint inhibitors, blocks these inhibitory signals, allowing immune cells to be more effective in fighting the tumor. This treatment has been shown to be effective in treating many types of cancer, but many cancers, including brain tumors, have yet to demonstrate significant response to immune checkpoint inhibitors.

For years, Catherine Flores, Ph.D., an assistant professor in the UF College of Medicine’s Lillian S. Wells Department of Neurosurgery, has been studying mechanisms of resistance to a type of immunotherapy called “PD-1 checkpoint blockade” in rodent models of glioblastoma and medulloblastoma. Glioblastoma is the most aggressive form of adult brain cancer, with life expectancy of less than 24 months from diagnosis. Medulloblastoma, a brain tumor in the cerebellum that occurs most commonly in children, is curable in most cases, but up to 20 to 30 percent of patients succumb to recurrent disease.

In her paper, Flores and her team show that in a rodent model, “hematopoietic stem and progenitor cells” isolated from bone marrow could be used to reprogram glioblastoma tumors to make them sensitive to immunotherapy treatment. Where resistance had been a barrier, an intravenous infusion of hematopoietic stem and progenitor cells led to a robust response to immunotherapy treatment in aggressive brain tumor models, the investigators found.

“These findings may really open the door to successful immunotherapy treatment of malignant brain tumors,” said Mitchell, co-leader of the Cancer Therapeutics and Host Response research program at the UF Health Cancer Center and a member of the Evelyn F. and William L. McKnight Brain Institute of the University of Florida. “We are working rapidly to translate this approach into early phase human clinical trials. This is a totally novel mechanism of overcoming resistance to checkpoint inhibitors that’s been shown to work in multiple resistant brain tumor models. If successful in a clinical setting, this approach would have potential to transform treatment for the proportion of patients who do not currently benefit from this remarkable class of immunotherapeutic treatment.”​

The diagnosis of glioblastoma is devastating for patients and their loved ones. Standard treatment includes high-dose chemotherapy, aggressive surgery and radiation; without treatment, survival is typically less than six months.

“Standard treatments for brain tumors are both highly toxic and nonspecific, and after treatment for brain tumors, patients can still suffer from the damage caused by these very aggressive therapies,” said Flores, the principal investigator of the Hematopoietic Stem Cell Engineering Laboratory within the UF Brain Tumor Immunotherapy Program. “Our goal is to develop therapies that are safe, effective and have less damaging long-term effects on our patients.”

While the advent of immunotherapy has been a breakthrough in treating some cancers such as melanoma, developing immunotherapies against brain tumors and many other types of cancer has proved a vexing challenge.

“Immune checkpoint inhibitors such as PD1-blockers have dramatically changed the landscape of treatment for many malignancies, with probably more FDA approvals over the last five years than any other single agent to treat cancers,” Mitchell said. “But when we drill down into the actual details, only a small proportion of patients from a variety of cancers are gaining benefit from these immunotherapy drugs, maybe 20 to 30 percent. And malignant brain tumors have not really responded to this class of drugs at any real appreciable rate.”

Of the new approach, Flores said: “It was very encouraging to see that this therapy was efficacious in multiple animal models of brain tumors, not just glioblastoma but also medulloblastoma and brainstem glioma.”

Flores said the hope is the treatment will work against other types of cancers as well. The next step in her line of research is to start examining brain metastases that originated from lung and breast cancers.

“Our findings are significant not only because of their implications against brain tumors but also because they may have an impact on other tumors as well,” Flores said. “We have found that the stem cell transfer actually impacts the entire immune system, not just the tumor itself. So if we can boost a host immune system with a simple stem cell transfer, this may have huge implications across different tumor types.”

Feasibility and safety studies are now underway; the team is aiming to move the research into clinical testing within the next 12 to 18 months.

“One of the most exciting things,” Mitchell said, “is that because this is using stem cell therapy in combination with already FDA-approved drugs, the transition from where we are in the preclinical setting to applicability in humans is relatively streamlined compared with many other therapies we’ve translated into the clinic previously.”

Michelle Koidin Jaffee is the Science Writer for the McKnight Brain Institute of the University of Florida. In more than 20 years as a journalist, she worked as a reporter... END_OF_DOCUMENT_TOKEN_TO_BE_REPLACED